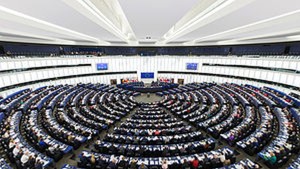 Malmo, December 7 – A spike in reported rapes that coincides with the influx of refugees and migrants from African and Middle Eastern countries into Europe has driven the European Parliament to take decisive steps to combat the sexual violence, leading to a new Continent-wide cap this week on the number of rapes allowed per migrant.
The body voted overwhelmingly this afternoon to limit the number of permissible rapes per Muslim migrant to two, a figure beyond which the perpetrator will face the local justice system, if the local justice system can penetrate the no-go zones where many migrant communities cluster. Supporters of the measure hope the limits provide a better sense of safety and security for citizens as well as a welcoming model for the newcomers, who may face a steep learning curve entering a culture where rape is a less-accepted form of communication.
“It’s crucial that we strike a balance,” stressed Asken Foryt, a Norwegian delegate to the parliament. “Violence, especially sexual violence, has seen an unacceptable rise in the last several years, especially among our newer residents, so we have to find a way to wean them from that behavior. But a sudden ban on rape would likely prove untenable, considering the assumptions that governed life in their previous environment. It is our hope that eventually, within a generation or two, we might no longer see a difference between the sexual assault rate among immigrants and the general population. The law leaves room for a lowering of the limit to one per migrant after seven years.”
Among the details of the limit is that the per-migrant figure will not be taken individually, but in the aggregate: only as rapes accumulate beyond two for every migrant in Europe annually will the limit be considered breached. Thus, explained Dutch parliamentarian Majden Groper, a single migrant might conceivably commit hundreds of reported rapes without legal consequences, because many other migrants are not accumulating rapes at nearly the same rate, and some avoid them entirely, bringing down the per capita figure.
Critics of the measure expressed concern at its strictness. “Migrants and refugees already face prejudice, and this does not help,” lamented German delegate Muhammad Schtupp. “I could have voted for this law if the limit were above six or seven, but I fear that we are sending the wrong message at a time when openness to people seeking a better life is more important then ever. If Europe doesn’t want these rapes to happen it really should stop behaving in ways that invite them.”