The EU Parliament Plenary session on US recognition of the Golan Heights as Israeli territory and the possible annexation of the West Bank settlements.

Some right wing MEPs supported Israeli control over the Golan, although most did not. You can watch the debate here:

The statement from High Representative/Vice-President Federica Mogherini was predictably against Israel – and wrong on facts. She referred to the 1949 armistice lines between Israel and Transjordan as “pre-1967 borders,” saying, “The EU will recognize changes to the pre-1967 borders only if and when agreed by the parties, including with regard to Jerusalem.”

But they were never borders and Palestinians were never officially presumed to own the land on the other side. The entire premise of the Oslo process was that all the land east of the line was disputed, which is why it was subject to negotiation to begin with. It wasn’t a border dispute where cartographers could determine where an earlier boundary was, it was a negotiation over who gets what land to create border between the State of Israel and a Palestinian Arab entity, which may or may not have ended up as a state. 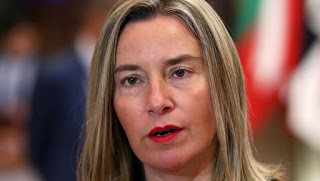 Mogherini then redoubles on international law as it applies to borders – borders that are fictional.

“The idea that you can change borders with the use of military force is a dangerous one in Europe, in the Middle East, elsewhere,” she said. Yet the 1949 armistice lines were created by war that was started by the Arab side to begin with, and they were never meant to be permanent. UNGC 242 says that Israel has the”right to live in peace within secure and recognized boundaries free from threats or acts of force,” a phrase inserted specifically because the 1949 lines were not secure nor recognized. The Arabs certainly didn’t recognize them as borders, and the armistice agreements made that explicit.

There is something wrong where a top EU diplomat can publicly lie about the Green Line and international law and no one even notices.