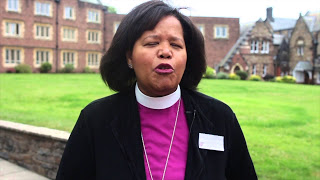 Weeks after her lies about alleged Israeli crimes were thoroughly debunked, Bishop Gayle Harris has finally issued an apology:

I am very aware of the dismay resulting from my statements on the floor of the House of Bishops at the General Convention in July relating to Israel and Palestine.

For my entire adult life I have maintained that the State of Israel must exist, with safe borders and the establishment of respectful relationships by and with neighboring countries.  I have strongly condemned the actions of extremists and bigots against Jewish people in the United States.  I also hold that within any country’s borders justice and the respect for the dignity of every human being is paramount.  I have not, nor would I ever, condemn the whole of any people or ethnic group by criticizing the actions of a few, whether as individuals or as agents of any government.

After reviewing my words in the House of Bishops from a transcription, I now acknowledge that I reported stories which I had heard and unintentionally framed them as though I had personally witnessed the alleged events.  I sincerely apologize.  I now understand how the framing of my words could and did give the wrong impression.  The fault is solely mine.  I acknowledge also that I did not take the opportunity to verify these stories.  I was speaking from my passion for justice for all people, but I was repeating what I received secondhand.  I was ill-advised to repeat the stories without verification, and I apologize for doing so.

Our society is experiencing a rise in public slander, anger and bigotry, where civility and respectful dialogue on different perspectives has been sidelined for invective and condemnation.  In this context, I am now painfully aware that my words in the House of Bishops caused pain for many.  I am committed to share my concerns in ways that do not simplistically demonize others and cut off discussion, and I hope for the same in return.

Again, for the hurt I have caused, I do apologize.  It is my hope, and my commitment centered on our baptismal vows to continue to “strive for justice and peace among all people, and respect the dignity of every human being” (from The Baptismal Covenant, The Episcopal Church, The Book of Common Prayer).  May there be such equality and respect between Israelis and Palestinians, and may there be among us all justice, in order to bring God’s peace.

Notice that nowhere does she say that the stories were false, even though the story about the Temple Mount is clearly impossible and the other one was not reported in any media ever.

She doesn’t want to alienate her anti-Israel fans by flatly saying that she did investigate and could find no evidence that the stories were true.

The apology is better than nothing, but it is not what it should have been if she really learned her lesson. It isn’t enough to admit that she didn’t verify the stories – she should admit that they are false.