TOP NEWS
http://elderofziyon.blogspot.com/2016/09/eoztv-wisdom-of-93-year-old-shimon-peres.html
Besides the usual obituary talking points about Shimon Peres, there is a lot more that he accomplished in his lifetime. In this EoZTV we discuss some of them – like how he helped fix Israel’s severe economic problems, how he was a poet and wrote a song that was recorded earlier this year, how and why he embraced technology, and finally parts of a remarkable interview he gave Tablet Magazine shortly before his stroke, which is excerpted below. 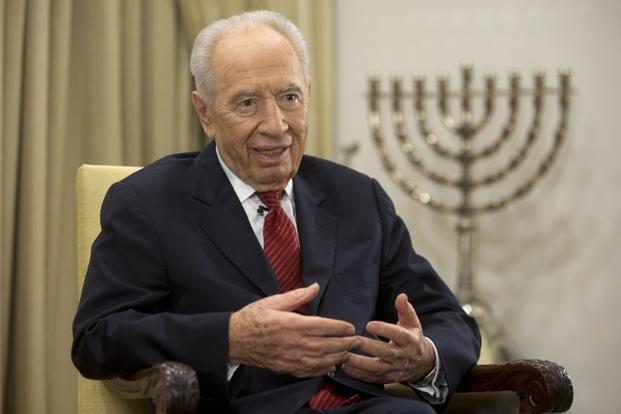 Tablet has the last interview with Shimon Peres. Here are some excerpts, but the whole thing is worth reading.

I was among the first to visit China. And they knew from my biography that I am a graduate of an agricultural school. So the foreign minister says, “Have a look at the Chinese agriculture.” I couldn’t believe my eyes. It was so primitive! So backwards. I said, “What are you doing?”

We suggested to them that we start with seeds: An Israeli seed of wheat gives you a yield that is three times more than the Chinese one. Then they did the same with milk. And we are today the best friends of China.

That’s the reason why, when I come to China, they still ask for my advice. I sat for three hours with Xi, and I told him, “Look what’s happening to you. You are today economically almost like America. And you smell power as well. But listen to me: You have to decide, either to be a giver or a taker. The biggest mistake is if you’ll use the power to take. The greatest wisdom is if you give.”

I am very good friends with Putin. And I shall give you, in brief, the content of one of our recent discussions.

I told him, “You’re 63 years old, I’m 93 years old. Tell me, what do you want to achieve in the coming 30 years? What are you fighting for? Are you hoping to piss off America?”

“America wants a piece of Russia? No. You have trouble discussing things with Obama?”

And I said, “America will win no matter what you do.”

“Because they are lucky, and you are not.” [Laughs.]

I told him more. “When an American wakes up in the morning, what does he see? Mexico in the south, and they accept Mexicans in their country. Canada in the north, they are the best friends in the world. And on the right and on the left, there are fish in the water.

“What does Obama have to worry about? You, you wake up in the morning, whom do you have? Japan, China, Afghanistan? My god! They know that you have plenty of land, and you don’t give them a penny. You have 20 percent of the sweet water, and you give nothing. So when the snow in Siberia melts, the first thing you will see there are Chinese. Because there are plenty of Chinese in the east, and not so many Russians.

The second thing I told him was: “America has the best proportion between the size of the land and the size of the people. You here have the worst. 20 million square kilometers. My god. But what you don’t have are people. Your people are dying. Don’t be impressed by the applause and what people are saying. They won’t forgive you. Why do Russians live for only 62 years, while Americans will live 82 years?

And then I told him: “You behave like a Tsar.”

I am very open.

I said, “What did the Tsars do? They developed two cities, St. Petersburg and Moscow, as a showcase. Whatever you want you will find there. The rest of Russia is like Nigeria covered with snow. Your people are dying. You don’t give them life. You think they’ll forgive you?”

“America had the guts to take the Marshall Plan, a huge piece of their GNP that they gave to this dying Europe. And in this way, they have shown that this is the best investment in the world.”

There is no European country that didn’t take an empire. The French and the British, the Portuguese, everybody. And what happened? They were thrown out of there and left with nothing. England, the greatest empire from sunrise to sunset, all the oceans, and the nice, nonviolent Indians threw them out, and left them with nothing but three small islands, they don’t know what to do with them.

“Believe me,” I told Putin, “enemies and animosity are the greatest waste in life. You are investing in a foolish thing.”

The way to peace is not war, and not negotiation. It’s innovation. To be great in science, you don’t have to go to war. You can be a small country in size and a great country in content. And even today, this option exists. And I believe in it. It’s difficult, it may take time, but everything is difficult. I have spent my entire life as a dreamer. And as you said last time, an optimist. I choose to be an optimist.

Yes it was that phrase that I liked. [Laughs.]

I think to deal with the past is a waste of time. You can’t change it anyway. [Laughs.]

Better to dream than to remember.