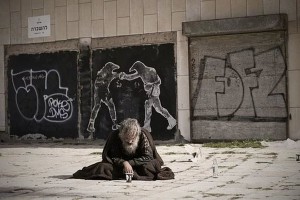 Tel Aviv, November 21 – An activist worried that human-driven climate change will doom civilization and disrupt the planet’s fragile ecosystems within twelve years has found a kindred spirit in a homeless man who spends much of his time pacing back and forth near a downtown street corner with a placard warning of the imminent demise of humanity.
Yona Kassander, 27, came upon a man two weeks ago known to locals as Efi, a street-dweller who most observers estimate has reached past the age of seventy, and whose chief pursuit involves warning passers by of the coming end of the world, both by means of signs declaring the apocalypse nigh and by yelling. Kassander found the man’s message resonated with her ecological sensibilities, and in the time since has dedicated at least two hours per day to sitting, marching, holding signs, and chanting at others with her new friend about society’s imminent collapse.
“I feel like I’ve crossed some important borders with this initiative,” she gushed on her way to a yoga session following an afternoon with Efi. “Too often the movement to raise awareness and effect real change fails to engage the disempowered elements of society. It’s gratifying to know that I’ve established this connection with someone far outside my socioeconomic stratum, with whom I have so little in common, but with whom I can partner on challenging to world to wake up and do something before we destroy our planet.”
“Repent!” concurred Efi, waving a placard at a reporter. “Repent! Mend your ways! Doom is coming for all! Got any spare change?”
Pedestrians, commuters, cyclists and others in the vicinity remarked on the incongruity of the two different personalities demonstrating together. “Who?” wondered a software developer returning to work from lunch. “Oh. Huh. Well, you don’t have to be homeless to be crazy, I guess.”
“I don’t know what that’s all about,” commented a delivery driver, “but I do know whatsername’s favorite herbal infusion has to be delivered from the Far East, and it’s not walking here itself, so I don’t know whom she thinks she’s kidding with that carbon emissions crap.”
“It’s coming,” added Efi, wagging an admonishing finger at a group of tourists who kept their distance. “No one will escape! Not you in your fancy car, not you in your iPhone!”
The septuagenarian hobo expressed only confusion when asked how the current environmental and ecological crisis relates to his prophecies of doom.