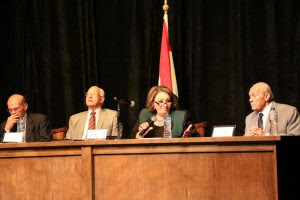 Egypt’s Supreme Council of Culture commemorated the 50th anniversary of Gamal Abdel Nasser’s death with a conference that was in many ways a direct attack on Israel, employing “Protocols”-type antisemitic tropes.
The conference, held under the direction of Minister of Culture Dr. Enas Abdel Dayem, employed the slogan “Jerusalem is the capital of Arabism.”
Historian Assem El Desouki spoke at the conference and described Israel as a “colonial ghoul” with a “greed for riches” which he says is “the root of a grand scheme created to break up the Middle East.”

Another attendee, previous Vice President of the Supreme Constitutional Court of Egypt Tahani al-Gebali, said, “Egypt is the heart of Arabism and the grand prize for which its enemies awaits for its fall to announce the success of the Zionist-American project for Israel’s hegemony over the region, and weakening any potential resistance from its roots; it can still restore the Arab ranks to face the danger that is slowly creeping in. History is proof of that.”