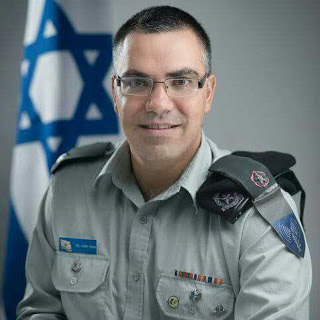 Even for Haaretz, the interview that Nir Gontarz transcribed with Major Avichay Adraee, head of Arabic communications for the IDF Spokesperson’s Unit, has nothing to do with journalism and everything to do with advocacy.

Instead of a normal interview, Gontarz transcribes every word of phone conversation he had with Adraee. He thinks it makes Adraee look bad. Instead, it makes Gontarz look very, very bad.

About the honor of the Arab woman, who shouldn’t go out to demonstrate but stay at home and look after the children.

I’m more interested in the second part: Did you really recommend that Arab women look after the house and children?

No, what I’m saying is that I quoted from what the Prophet Mohammed said what the woman I’ll translate it for you he says that a good woman is a woman who has honor, and a woman who has the interest of her home and her children at heart. That what interests her is the interest of her home and her children so she can be a good example for them. And in contrast, the bad woman is one who behaves selfishly and doesn’t set an example and is not um a mark of honor to the society from which she comes.

Adraee quoted the Quran about the role of the Muslim woman and pointed out that it is opposed to the idea of a woman throwing rocks. Being that his entire job is psyops, this is quite appropriate for his audience.

But Gontarz has no clue:

So you agree with the Prophet Mohammed, if you’re quoting him in this context.

What does it matter if I agree with the Prophet Mohammed?.

Gontarz, not realizing that he made no point whatsoever, goes on:

You also tweeted that burning tires is a non-Muslim act.

What Allah said, what’s written in Sura Verse 56 It says that Allah commands the believers not to harm the world that he created.

That that’s not environmentally friendly.

The Prophet Mohammed also said that the Muslim should plant trees, guard the soil, plant it, care for all living things and so on. And that it’s not environmentally friendly what burning tires do to the environment, to the soil, to the world that was created, that it goes against everything that’s written in the holy books.

He asks a series of questions (I’m not bothering with Adraee’s answers, because the questions are what Gontarz wants the readers to read, not Adraee’s responses:


Tell me, what exactly is this job you’ve taken upon yourself to interpret the Koran for them, as to how a woman should behave and how a Muslim should behave? Is this as a private person, or in the name of an IDF that is now also becoming an educator and Koran analyst for the Palestinians? This is the IDF’s job? You don’t think it’s a little patronizing for the Jewish officer from the occupying army to be teaching the Arabs how they should behave?

The colonialists and occupiers have always taught the “children” the “proper” way to behave.

Do you think it’s dignified for an Israeli officer to be teaching the Arab civilians who are under occupation or blockade how they should behave as Muslims? To be saying that a Muslim woman’s honor requires modesty?

As an Israeli citizen, I’m embarrassed by what you’re doing. You represent the cliché of occupation.

Last question: Should a Jewish woman also stay home and look after the children?

Gontarz, who reveals that he has no interest in any journalistic integrity or objectivity, nor in listening to his interviewees words, is complaining that the IDF spokesperson is not doing his job properly.

There is only one person in this article who is acting unprofessionally, and it sure isn’t Adraee.

By the way, Gontarz publishes all his articles as full interview transcripts, including “How are you?” He interviewed a senior Hamas spokesperson about the “Great Return March” before it began, and had nothing at all critical to say about Hamas.

In fact, he said that they way Hamas described it, “It sounds like Woodstock.”