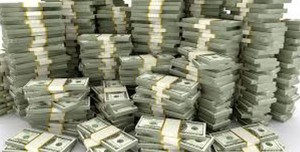 Bnei Brak, February 20 – A local man has followed the lead of the Islamist group that controls the Gaza Strip, insisting that unless Doha agrees to supply him with all his petroleum needs and with suitcases full of currency, he will not grant his estranged wife a Get, news reports indicate.
Menashe Nussbaum, 38, increased his demands in ongoing negotiations over a religious divorce from his wife Miriam, 35, this week, in addition to custody of the couple’s four children and possession of most of their joint assets as conditions of granting the Get, or document of severance. An attorney for Mr. Nussbaum told reporters that upon seeing the success of Hamas’s threats to inflame the situation in Gaza further unless supplied with fuel and cash, and the Israeli government’s accession to that demand, his client decided to take a similar tack. Under Jewish law, a divorce must have the husband’s consent; without the Get, Mrs. Nussbaum is still legally married, and may not remarry, leaving her in personal limbo. The couple wed in 2005.
“It only makes sense to play the hot hand,” explained advocate Oded Sheister. “Regardless of the merits or, even success, of my client’s other demands, if the Israeli government is going to cave to extortion and allow Qatari funds and resources to reach a genocidal terrorist organization, well, why can’t he have a piece of that action? He might as well try, considering his moral standing, despite the less-than-ideal tactic of holding out on giving a Get, is still better than that of Hamas. So we’re waiting for Bibi’s answer on this.”
A spokeswoman for Mrs. Nussbaum stressed that although withholding a Get, even as legal leverage, constitutes psychological and emotional abuse, she and Mrs. Nussbaum have no objections to the husband demanding Qatari largess as part of any final arrangement. “We don’t mind that a bit,” stated Rina Lazarus. “If he can shore up his ability to pay alimony and child support by such methods, that’s fine. The Israeli government has shown it’s willing to provide cash conduits to even the most heinous parties, so as far as this tactic is concerned, more power to Mr. Nussbaum.”
Experts called the move legally sound but setting a troublesome precedent. “The next recalcitrant husband might take this as a green light to be even more like Hamas, given how Netanyahu treats them,” cautioned Natan Flywheel. “And I can’t fault the reasoning, but I’m wary of Get-refusers launching incendiary kites at Israeli communities as a tried and true method of getting Bibi to facilitate shipments of cash to them.”