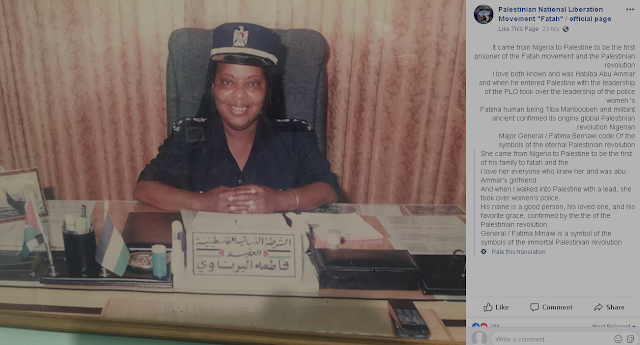 This is Fatima Bernawi, one of the earliest female terrorists.

In October 1967 she placed a bomb at the Zion Cinema in (west) Jerusalem. The bomb didn’t explode. Israeli police arrested her and she claims, ludicrously, that she was arrested because of her skin color – not because she placed a bomb in a movie theatre.

Bernawi was released after 10 years of a life sentence and returned to Fatah, where she became a  police chief in Gaza. Yasser Arafat was quoted once as saying “if he would marry anyone it would be [Fatima] Bernawi.”

Though the bombing was a failure, Bernawi insisted it was successful, saying, “This is not a failure, because it generated fear throughout the world. Every woman who carries a bag needs to be checked before she enters the supermarket, any place, cinemas and pharmacies.”

This is the very definition of terror – instilling fear for political purposes. Bernawi is a true pioneer of terror, and therefore she must be honored by the Palestinians whose entire sense of self-worth is based on how successful they are in attacking Israeli Jews.