Ever since November 25,  when the UK’s Chief Rabbi wrote an article for The Times of London about how toxic a Labour government would be for Jews, there has been daily coverage in the British press about antisemitism in Labour under Jeremy Corbyn.

The most recent bombshell was the leak yesterday of  the Jewish Labour Movement dossier into the party’s handling of antisemitism allegations that was submitted to the UK  Equality and Human Rights Commission.

Among the revelations by Labour members in that document:

One respondent who listed 22 examples of antisemitic abuse at party meetings where he was called “child killer”, “Zio scum”, and “Tory Jew” as well as being told “Hitler was right” and that he was “good with money”.
Another who witnessed a comment at a ward meeting that “the only reason we have prostitutes in Seven Sisters is because of the Jews”.
One member reported that other members defended an individual when they said it was “over-representation of Jews in the capitalist ruling class that gives the Israel-Zionist lobby its power”.
A parliamentary candidate who described a councillor being told by a fellow member to go home and count their money after being deselected.
A speaker at a fringe event at the 2017 Labour conference asserting the right to discuss whether the Holocaust happened.
One respondent reported that the membership secretary in South Tottenham, north London, objected to 25 applications for membership from the ultra-Orthodox Jewish community, and required home visits to these prospective members’ houses.

Given this wall to wall coverage of the antisemitism in Labour, even by left wing publications, has this had an effect on voter polling?

Since there are many factors and polling is an inexact science, this is difficult to know. Based on two pollsters, YouGov and SavantaComRes who have been polling often, it looks like Labour’s numbers were improving from the beginning of November up until the antisemitism story blew up, and since then it has lost only a single percentage point. 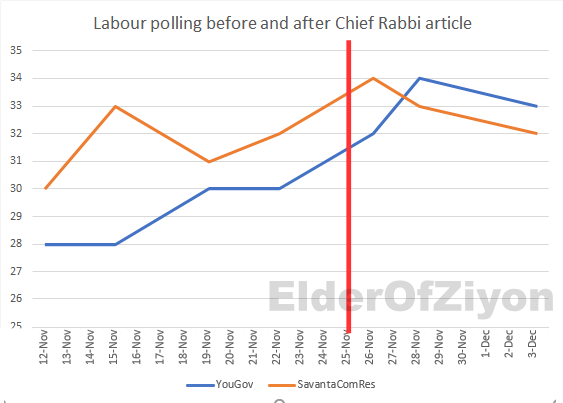 It seems possible that people who might have been swayed to change their votes to Labour decided not to since the Chief Rabbi’s article, but very few who had already leaned towards Labour changed their minds as a result.

A much scarier graph shows that young people are heavily pro-Labour, and antisemitism seems to bother them not at all. 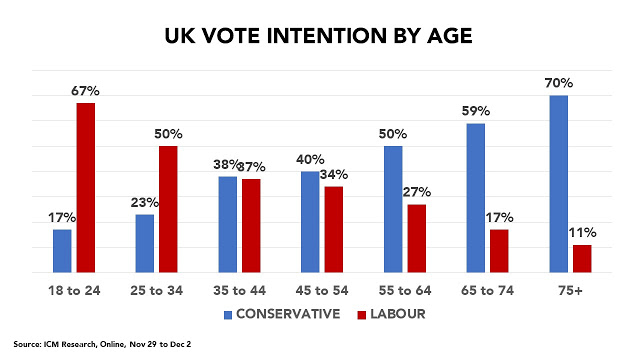