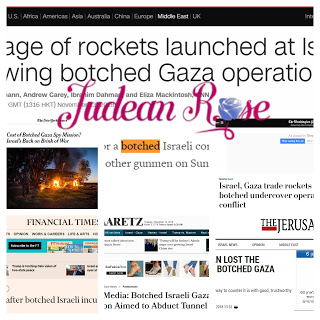 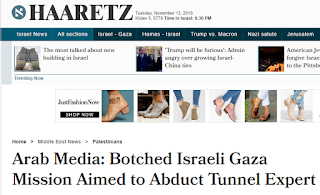 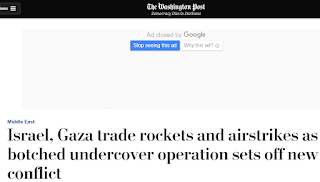 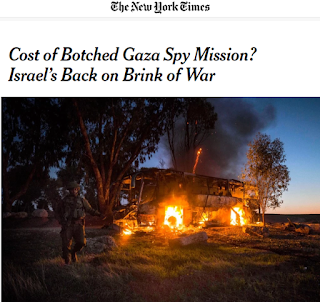 It’s like a contagious disease, this word “botched.”  Yet there is no proof that the operation was not a success.
None of these articles carry quotes from Israeli officials to the effect that the operation was “botched.” Probably because it wasn’t. Brigadier General Ronen Manelis, the IDF spokesperson, to the contrary said, “We are talking about an operation that was well-planned right down to the smallest of details. It is the sort of thing that takes place every night, and in most instances remains under the media’s radar.”
This time, added Manelis, the soldiers had found themselves in a “very complicated situation.”
In no way does anything Manelis said suggest the operation was “botched.” Something happened. That doesn’t mean the operation didn’t achieve its goal. That someone died does not mean the operation didn’t achieve its goal. There is just not enough information out there for us to come to that conclusion or to any conclusion at all.
Think of it this way: we all know about the Israeli team that infiltrated Iran to smuggle out their deepest nuclear secrets. Now imagine that just after that intelligence was successfully sent out of Iran to Israel, an Israeli agent was found out and killed. Does that mean his operation, with all the wealth of information he managed to sneak out of Iran, was “botched?”
Of course not.
By the same token, the fact that Officer “M” lost his life in the performance of his duty, does not mean that the goal of his operation was not achieved, or that it was somehow less than a success. A death in the performance of an operation does not make it “botched.”
The question is, why then, did so many news outlets hasten to report it as such?
The answer, of course, is that to call the operation “botched” serves to demonize Israel.
The word “botched” has a negative connotation. When used in association with the IDF, it suggests that mighty Israel is an incompetent failure, something everyone who hates Israel would like you to believe, though obviously, the opposite is true, considering Israel’s military history. The IDF is the finest army in the world.
As the idea for this blog was forming, friends began sending me articles suggesting the operation was botched, or commenting on Facebook threads to the effect that the operation had been botched. One friend wrote, “I thought the botched operation was an attempt to take out the Hamas leadership.”
To which I answered, “I have not seen any proof it was a botched operation. I wish people would stop saying that.”
She saw my point: “Ah. Okay. I just meant that the consequences to us, with the loss of M, were very dire. So, therefore it was not an unadulterated success. But you are correct. In the end, they may have accomplished what they set out to do.”

All the outlets that called the operation “botched” did so without evidence. They did it to harm Israel. My friend read that and it entered her subconscious. So she repeated it.

I don’t blame her. I blame them.
Be we do need to be careful not to absorb these harmful narratives.
A second friend sent me the NY Times article, “Cost of Botched Gaza Spy Mission? Israel’s Back on Brink of War.”
I responded, “It wasn’t botched. That’s the NY Times telling you a lie. CNN and Haaretz peddled the same lie. You shouldn’t ever believe them.”
She asked, “How would I know the difference?  I have 7000 people on my list who help advocate for Israel. Would appreciate your guidance.”
I explained it to her, how “botched” has a negative connotation of incompetence. So you have to look to see if they are quoting an actual, credible Israeli official saying that it was botched. None of the outlets have that. The evidence just isn’t there. So clearly, they just want to smear Israel.
And they’re quite willing to exploit the death of the heroic Officer “M,” who gave his life for the State of Israel, to do so.
They simply have no shame.