During the recent Democratic National Convention (DNC), many “pro-Palestinian” activists complained about what they perceived as a lack of interest and support for their cause. As the ambitious Linda Sarsour – who has been hailed by the Obama White House as a “Champion of Change” – put it bitterly on Twitter: “The ‘most progressive’ platform in history of DNC except on Palestine. Actually it’s more to the right its [sic] ever been.”

One problem with this complaint is that there is absolutely nothing “progressive” about Palestinians – quite the contrary: they are so much “to the right” that they make US social conservatives like the Tea Party Republicans look almost progressive by comparison. Already a year ago, I made the case that, given Palestinian views, it is rather bizarre that “progressives” would be so eager to champion the “Palestinian cause.” This post was in part based on an extensive survey of Muslim societies published in 2013 by the respected US research center Pew, and as EoZ reported back then, Palestinians emerged as one of the most religiously conservative and extremist societies of all surveyed Muslim-majority countries. EoZ highlighted some of the rather shocking results in an infographic.
So 89% of Palestinians would like to have Islamic Sharia law as “the official law of the land” in Palestine; 87% believe a wife “must always obey her husband;” 81% think people who commit adultery deserve to be stoned to death, and 62% want the death penalty for Muslims who leave Islam. How “progressive” is that?
Then there is the little matter of the longstanding Palestinian support for terrorism. As surveys going back some two decades demonstrate, Palestinians have always firmly backed terror attacks targeting Israeli civilians – whether it’s Hamas rocket attacks, suicide bombings of restaurants or buses, or so-called “lone wolf” attacks. Just how immensely popular the killing of Israelis is among Palestinians was again demonstrated recently, when the supposedly “moderate” Fatah faction tried to shore up its support ahead of municipal elections by listing the killing of 11,000 Israelis as the group’s top achievement.
But even when the target is not Israel, Palestinians remain enthusiastic supporters of terrorism: in the wake of the 9/11 attacks, Pew monitored support for Osama bin Laden among Muslim publics for almost a decade, and Palestinians always emerged as bin Laden’s most ardent admirers. This is all the more noteworthy because the specific survey question Pew asked was quite convoluted and seemed designed to generate results that would minimize support for the Al Qaeda leader: survey participants were asked if they had “confidence” in Osama bin Laden to “do the right thing regarding world affairs.” Remarkably enough, in 2003, bin Laden actually inspired more “confidence” in Palestinians than Yassir Arafat. Bin Laden for President of Palestine – how progressive is that?

To be sure, prominent “progressive” proponents of the “Palestinian cause” in the US – like Ali Abunimah or Max Blumenthal – don’t really have a problem with Palestinian support for terrorism; indeed, they themselves are outspoken supporters of the terror group Hamas. Unfortunately, White House-endorsed “Champion of Change” Linda Sarsour also seems prepared to justify terrorism. As she declared some two years ago on Twitter: “Israel steals more land and they expect the Palestinians to sit back? Then Palestinians are the terrorists? I am beyond words.” [Archived here]. At the same time, Sarsour also wondered if there are “still people out there who actually think a two-state solution is viable? SMH [shaking my head] at whoever they are.” [Archived here].
So it seems fair to conclude that when Linda Sarsour campaigns for the rights of Palestinians, she doesn’t really mean a Palestinian state that would peacefully co-exist with Israel. Of course, she can claim that this view faithfully represents how Palestinians feel, since an overwhelming majority of Palestinians believe that their “rights and needs” require the elimination of Israel. 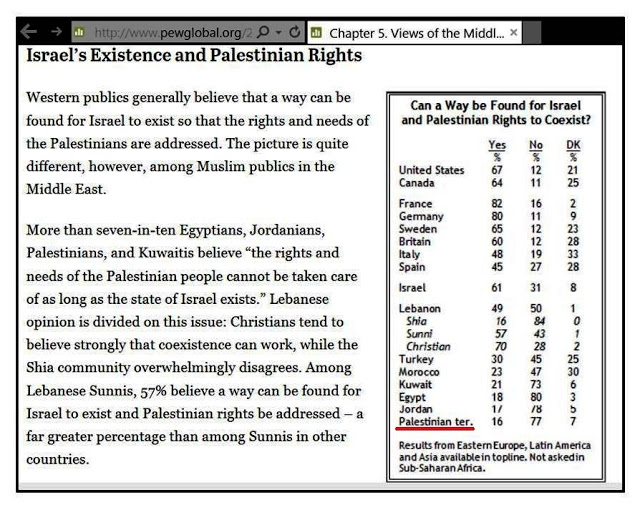 Maybe that’s progressive – and western democracies, where majorities of people don’t share this view, are just too reactionary.
But it is instructive to examine a bit closer how Sarsour’s “pro-Palestinian” views reflect on supposedly “progressive” politics in the US.
A few days ago, Sarsour posted a tweet urging people to “Follow @P_I_A_Mag, first Palestinian American magazine in the US;” she added a photo of herself holding two issues of the magazine. 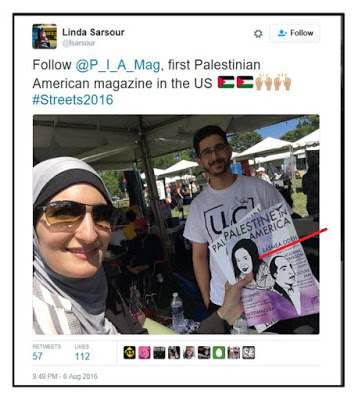 As marked in the screenshot, the top issue she holds has an article about Rasmea Odeh; a recent article about Odeh in the magazine is quite long, but requires that readers are familiar with the case. The Wikipedia entry about the Odeh case introduces it as follows:

“Rasmea Yousef Odeh (born 1947/1948; also known as Rasmea Yousef, Rasmieh Steve, and Rasmieh Joseph Steve)[2][3] is a Palestinian woman and former United States citizen. She served as associate director at the Arab American Action Network in Chicago, Illinois. […] Odeh was convicted in 1970 by an Israeli military court of involvement in fatal terrorist bombings, and in 2014 by a US federal jury of immigration fraud. She was sentenced to life in prison in Israel for her involvement in two terrorist bombings in Jerusalem in 1969, one of which killed two people, and involvement in an illegal organization, the Popular Front for the Liberation of Palestine (PFLP). She spent 10 years in prison before she was released in a prisoner exchange with the PFLP in 1980.[…] Odeh was convicted of immigration fraud on November 10, 2014, by a jury in federal court in Detroit, Michigan, for concealing her arrest, conviction, and imprisonment for the 1969 bombings.”

Professor William A. Jacobson has provided extensive coverage of the case on his blog Legal Insurrection; particularly useful in the context here is a post written a year ago that highlights “The Sickening Deification of Rasmea Odeh” by anti-Israel activists in the US. In this post, Jacobson refutes claims that Odeh is innocent of the terrorist murder charges and highlights efforts to transform Odeh into an icon “as part of a continuing effort by anti-Israel activists to co-opt and hijack the Black Lives Matters movement.”

Right – what could be more progressive than convincing Black Lives Matter (BLM)-activists that Jewish lives don’t matter and that therefore a convicted terrorist who murdered two young Israelis should be one of their heroes?

If there is one constant in the long history of antisemitism it is the notion that whatever you see as your biggest problem, it is somehow the fault of the Jews. Nowadays, it’s the fault of the world’s only Jewish state.
And it seems that for “progressives” like Sarsour, black lives matter most when they can somehow be manipulated into adopting a murderous Palestinian terrorist as their hero while at the same time accusing Israel of genocide and other evils in the service of the “Palestinian cause.”