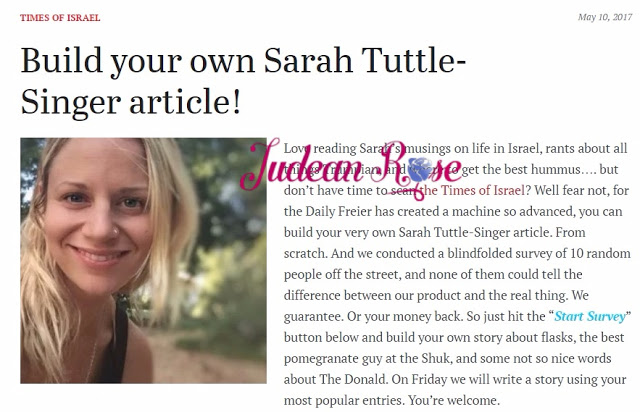 This one was just too much fun. Especially after a day in which we were told that Trump is definitely not moving the U.S. embassy from Tel Aviv and that it’s because Israel asked him not to–only to be told an hour or so later that it’s not true and Bibi knows nothing about it.

But then the Daily Freier came out with this awesome Build your own Sarah Tuttle-Singer article! generator. You click “start survey” and there are five entries, the first four of which you have to fill in the blanks with multiple choice phrases supplied by the author. It’s kind of like Mad Libs (remember those?).

The fifth entry is where you can get creative and make up your own stuff–that’s the part where she’d normally trash Donald, because no STS article would be worth its salt without some solid Trump-trashing.

And, ha ha, STS herself was forced to be a good sport about it. 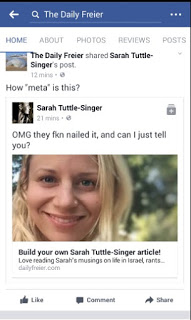 The best part? On Friday they say they’re going to publish the best stories using the most popular answers. YESH!

My only complaint is that the choices offered are a little too tame. There’s no f word, no s word. But you can understand it. They don’t really want to emulate the writer’s saltier side. Why be like her?

It’s enough to suggest she’s formulaic and silly. It kind of makes you despair of the human race when you see one of her pieces go viral only because she’s used “rabbi” and well, something that shouldn’t be in the same title with “rabbi” in it.

Check it out HERE.