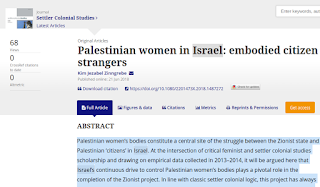 Check out this abstract for the paper “Palestinian women in Israel: embodied citizen strangers” written by Kim Jezabel Zinngrebe and published in Settler Colonial Studies:

Palestinian women’s bodies constitute a central site of the struggle between the Zionist state and Palestinian ‘citizens’ in Israel.

Note the scare quotes around ‘citizens’ as if Arabs are not truly citizens of Israel.

At the intersection of critical feminist and settler colonial studies scholarship and drawing on empirical data collected in 2013–2014, it will be argued here that Israel’s continuous drive to control Palestinian women’s bodies plays a pivotal role in the completion of the Zionist project.

I wish I could read the paper to understand exactly how Israel is trying to control the bodies of its Arab female citizens, but I’m more interested in how the author defines “the completion of the Zionist project.” It sure sounds like she defines Zionism as ethnically cleansing all non-Jews from Israel.

In line with classic settler colonial logic, this project has always closely linked native women’s bodies and native land in its discourses and practices.

I read a fair amount of Zionist literature and I don’t recall seeing anything that linked Arab women’s bodies with the “native land” – since Zionism defines Israel as the Jewish native land and Jews as the natives of the land!

Therefore, Zionist settler colonialism must be considered a not only racialised but also gendered process.

If one could find these fictional proofs that Zionists care so much about Arab women and treat them differently than Arab men, sure.

Palestinian women’s stories are complex and contradictory and cast the body as the key medium through which they experience citizenship in Israel as a continuation of settler colonialism by other means.

So they are citizens. They can vote and create Internet startups. They can drive, become Knesset members and news anchors and reality TV stars. But somehow their citizenship is a continuation of the equally nonexistent settler colonialism.

This paper claims that it is, in fact, via citizenship that the Palestinian women’s forced exclusion from the Israeli body politic is realised, thereby debunking prevailing Zionist myths of citizenship in Israel and the Nakba as a one-off event.

So by giving them full rights of citizenship, Israel is really taking away their rights! How insidious these Jews are!

Please, please, someone send me the full text so we can see how the author debunks obviously verifiable facts about Arab women citizens of Israel.