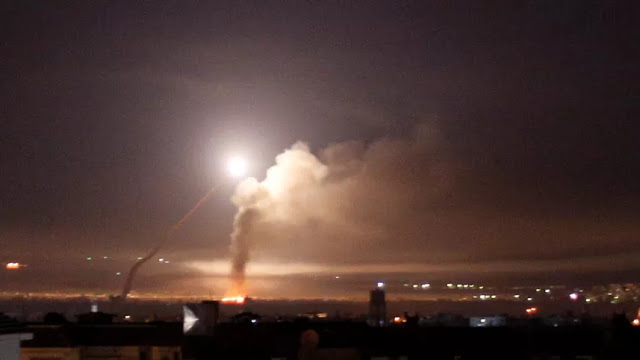 There is a lot of contradictory information as to what happened overnight in the Golan and in Syria.

At first, Israeli media reported that Iranian forces in Syria shot some 20 missiles towards Israeli military sites, and Iron Dome intercepted “some” of them. The initial announcement from the IDF said there was “limited” damage to Israeli military bases.

Then, this morning Israeli’s Defense Minister Avigdor Lieberman said, “Not one Iranian rocket landed in the State of Israel. Nobody was hurt. Nothing was damaged. And we’re to be thankful for that. We damaged nearly all of the Iranian infrastructure in Syria.” The IDF confirmed that account.

The IDF spokesperson now says that four missiles were intercepted by Iron Dome and the rest of the 20 rockets fell in Syrian territory.

The disconnect between the two statements is concerning. It is possible that some of the Iron Dome shrapnel fell on Israeli territory which prompted the initial assessment, or that the original announcement was meant to play it safe in case there was one missile that made it through that hadn’t been noticed yet, but it would be nice to clear that up.

The IDF also says that it struck dozens of Iranian military sites in Syria.

Pro-Assad media, not surprisingly, paints a different picture, but the interesting angle is that it quotes Russian defense sources as well.

The Syrian Observatory for Human Rights says the Syrian side shot “dozens” of missiles at Israel. Syrian army sources claimed that Israel fired first, and that they shot 50 missiles in retaliation. No Arab source is claiming that Iran was involved.

Al Medayeen, a pro-Assad news source, claims that Syria targeted ten Israeli military positions, including “a military reconnaissance centre, a position for border security, a military centre for electronic jamming, a military centre for spying on wireless and wired networks, a communication station, an observatory for precision weapons, a gunships heliport, the headquarters of the regional military command of brigade-810, the command centre of the military battalion in Hermon, and the winter headquarters of the special snow unit.”

Al Medayeen also quotes Russian defense officials as saying that 28 F-15 and F-16 Israeli aircraft engaged in raids on Syrian territory and fired 60 missiles. More than half of the missiles were intercepted by Syrian air defense. The Russian source admits that Israel targeted air defense systems as well as Iranian positions in Syria.

Syrian state news agency SANA admits that several military sites in Syria including a radar facility, air defense positions and an ammunition depot were destroyed by the Israeli raids.

Lebanese media says that one or two missiles landed in Lebanese territory, causing little damage. It did not say what side these missiles were shot from.