The  Middle East Institute (MEI) and Center for Palestine Studies (CPS) at Columbia University are committed to offering K-12 teachers and college-level instructors the tools to both understand and teach critical issues of dispossession, belonging, and citizenship in the context of Palestine/Israel.  Many of the issues that arise in this context could be productively integrated into the K-12 and college-level curricula.

CPS and MEI invite you to a teachers workshop held at Columbia University, Saturday June 24, 2017 on citizenship and nationality in Israel/Palestine and its history more broadly. The workshop will focus on the challenges of establishing a state in 1948 that committed itself to be both Jewish and democratic; the status of the Palestinian minority in such a state; and the critical differences between a “homeland,” a “nation,” and a “state”. The workshop will include a set of short readings that will be distributed in advance for discussion.

What could be wrong with an Ivy League university wanting to teach history for K-12 to understand the Middle East?

Nothing – unless it is anti-Israel propaganda, as seems likely from the Center for Palestine Studies.

But we don’t need to research the professors or the Center for Palestine Studies behind this initiative to see that it is anti-Israel.  We only need to look at the poster advertising the program: 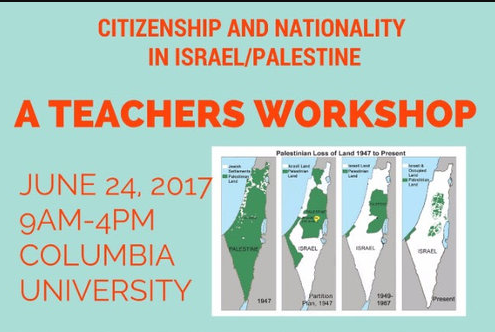 Yes, the graphic being used is The Map That Lies, the thoroughly debunked piece of propaganda that has already prompted MSNBC to apologize for showing it on air and prompted McGraw-Hill to withdraw and destroy an entire textbook that included it because it is a set of indefensible lies.

This isn’t education. This is anti-Israel indoctrination.

Too bad Columbia University doesn’t have the intellectual honesty to treat this lying set of maps with the same distaste as it would treat any other piece of lying propaganda.