A few days ago, EoZ highlightedthe latest screed of Joseph Massad, who is a professor at Columbia University and an occasional contributorto Ali Abunimah’s “The Jewish state is our misfortune/Hail Hamas”-website. Elder wondered in his post what Massad’s sources or evidence might be, and I pondered the same question a few years ago, when I researched Massad’s writings on the evil Zionist entity for several articles. I found at least a partial answer: for some of his main “arguments,” Massad clearly relies on the kind of “evidence” that is popular at the neo-Nazi site Stormfrontand that David Duke promoted in his “minor league Mein Kampf.”
You can read the post where I demonstrated this in considerable detail here(warning: it’s longish!);  but if you don’t have the time, you can just take the quiz I posted back then to illustrate how hard it is to distinguish between Massad’s stuff and what’s popular on Stormfront (correct answers at the end of this post; some of the quotes have originally British spelling, I Americanized it to avoid giving the game away).

1) “Nazism was a boon to Zionism throughout the 1930s.”2) “For all intents and purposes, the National Socialist government was the best thing to happen to Zionism in its history.”3) “In Germany, the average Jews were victims of the Zionist elite who worked hand in hand with the Nazis.”4) “Hitler could have just confiscated all the Jewish wealth. Instead he used the ‘Haavara Program’ to help establish the State of Israel.”5) “Between 1933 and 1939, 60 percent of all capital invested in Jewish Palestine came from German Jewish money through the Transfer Agreement.”6) “In fact, contra all other German Jews (and everyone else inside and outside Germany) who recognized Nazism as the Jews’ bitterest enemy, Zionism saw an opportunity to strengthen its colonization of Palestine.”7) “Zionists welcomed the Nazis’ anti-Semitic policies. Like the Nazis, they believed in race-based national character and destiny. Like the Nazis, they believed Jews had no future in Germany.8) “the Zionist Federation of Germany […] supported the Nuremberg Laws of 1935, as they agreed with the Nazis that Jews and Aryans were separate and separable races. This was not a tactical support but one based on ideological similitude.”9) “Zionism […] developed the idea of the first racially separatist planned community for the exclusive use of Ashkenazi Jews, namely the Kibbutz.”10) “The Zionists were afraid that the ‘Jewish race’ was disappearing through assimilation.”

Before I let you find out how you did, I should perhaps note what I just found out: my articles on Massad got me an honorary mention on Stormfront! As I noted in my post back then, Stormfront members shared and debated Massad’s notorious Al Jazeera column“The last of the Semites,” which Jeffrey Goldberg immediately denounced as “one of the most anti-Jewish screeds in recent memory.” 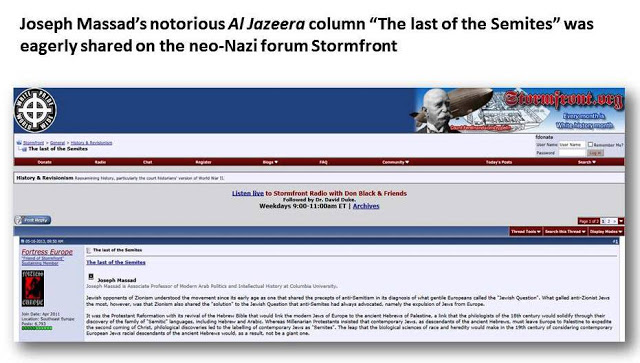 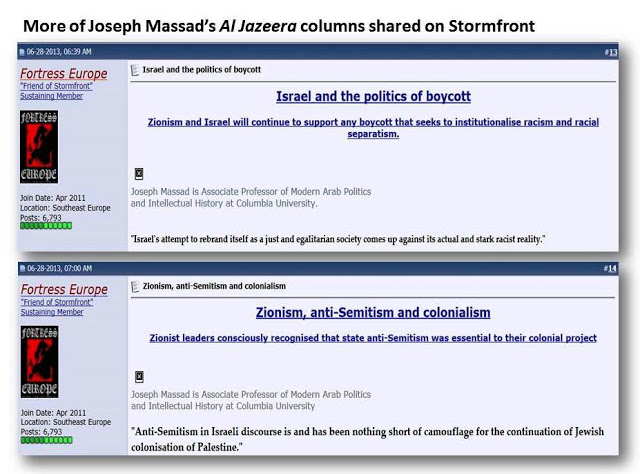 A few weeks later, one Stormfront member came across my post and linked to it with some heartfelt compliments, including “not-so-hidden Hasbara shill” who writes a “stinking blog, brimful with Israeli propaganda, lies and deceit;” “a manic proponent of the Zionist doctrine and propaganda.” But the Stormfront member noted that reading my post wasn’t entirely a waste of time, because it lead to “another two very interesting Massad’s articles” – which s/he liked so much that s/he promptly shared them…
Oh well, I do think I deserve their disdain – and Columbia professor Joseph Massad deserves their admiration.
* * *
1) Massad  2) Stormfront   3) Stormfront    4) Stormfront   5) Massad    6) Massad    7) Stormfront   8) Massad    9) Massad    10) Stormfront