The attack on one of Barcelona’s historic streets Thursday is the latest in a series of vehicle ramming incidents in the West that have killed 128 people since 2014.
At least 13 people were killed and 80 injured when a van, which witnesses said was traveling at a high speed through the tourist area, mowed down people in Barcelona.
Since 2014 there have been 14 vehicle ramming attacks in the West, according to a count by New America, a nonpartisan think tank.
Like school shooters, terrorists learn from other attacks. Vehicle attacks have become a method of choice for terrorists in the past three years since they require no training or expertise and they inflict just as much terror as more conventional tactics such as bombings.

The author, Peter Bergen, is CNN’s national security analyst and a vice president at the New America thinktank that he quotes.

Indeed, there have been exactly 14 car ramming attacks (more if you count non-terror attacks) aimed at people (as opposed to buildings) since 2014 in the West.

But if you count all the terrorist vehicle attacks against people listed by Wikipedia, you see that a significant percentage were in Israel: 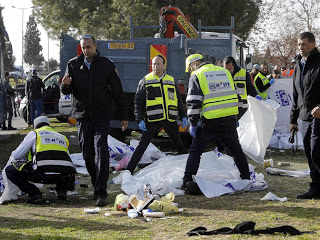 8 out of 23 recorded vehicular terror attacks – 34% – were in Israel, with 13 murdered (plus one stabbed to death after a failed car ramming.)

The deliberate attempt to minimize the ramming attacks in Israel continued at CNN, with a list of notable attacks since 2006 including only one attack in Israel even as it highlights non-fatal attacks in the US.

The New York Times has an analysis on why car-ramming attacks are such effective terror weapons – but the implication in that article is that it makes people fearful only if it happens in the West. There is a clear implication that most of these stories have: Those Israelis who suffered from such attacks since 2008 are not considered one of us, and their fears don’t count. But European attacks are the ones that make us fearful. Europeans are more like Americans than a Israelis are.

These attempts to minimize Palestinian innovation in car ramming terrorism become even more obvious when you read this 2008 Stratfor analysis that essentially predicted this trend:


Israel has seen three attacks in three months in which Arab Israelis from East Jerusalem used vehicles as weapons. No single group has claimed responsibility for all three attacks, but their similarities suggest that Palestinian militants have discovered a new tactic that, while not thus far as deadly as suicide bombing, could prove more difficult to prevent.

The casualty rate for these most recent attacks appears to be lower than suicide-bomber attacks, but as militants carry out more of these attacks, they could learn, improve their tactics and indeed increase casualties.

But the Western media is loathe to put Palestinian Islamic terrorists on the same level as ISIS.

So we see whitewashing instead of actual analysis.

Deep down, reporters and analysts and politicians want to believe Palestinian terror is anomalous – and at least partially justified – which is why we see such a consistent pattern of bad reporting and bad analysis.