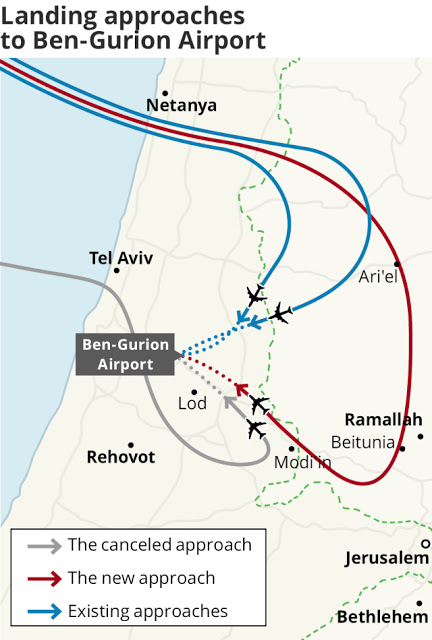 The Israel Airports Authority has inaugurated a new flight path into Ben-Gurion International Airport, despite the fact that it necessitates flying at a low altitude on the outskirts of Ramallah, Beitunia and other Palestinian locales in the West Bank. Despite the security risks entailed in possible exposure of these aircraft to ground fire while they pass over hostile territory, Israel’s defense establishment approved the new route.

The airport authority finished preparations for the new landing procedure at the beginning of the year, but it was inaugurated now because of both increased air traffic at the airport during the summer months and recent problems with the Global Positioning System in Israel’s airspace.

This situation had led to an almost total cessation of incoming flights using the previous route, which passed over the city of Modi’in.

The defense establishment approved the new approach path a year ago, but it was only implemented two weeks ago, after installation of an Instrument Landing System that enables landing in cases where the pilots have no visual contact with the runway. Two additional routes for incoming aircraft, from the north and northeast, continue to be open.

A former high-ranking official at the Civil Aviation Authority explained while additional flight paths sometimes need to be opened, no such route deep inside the West Bank – especially at a low altitude – had been approved before, even during emergencies such as Operations Cast Lead and Defensive Edge, in the Gaza Strip, in recent years.

“If a plane is fired at, it may not be brought down,” he noted, but it will be damaged and such an incident “would open the gates of hell.”

I hope there is more that is not being reported on why this route above Arab towns is not a concern.

Even the threat that a single bullet “would open the gates of hell” is not reassuring, since that would give Hamas more incentive to start a war between the PA and Israel while it sits back and laughs.

Maybe they are re-routing only the El Al (or other?) flights that have anti-missile defense systems.