The Cairo International Film Festival (CIFF) will no longer be honoring French film director Claude Lelouch during the festival’s 40th edition, which runs from November 20 to 29.

The CIFF came under harsh criticism by artists and intellectuals who rejected the festival’s recognition of Lelouch, as said he had cooperated with the Israeli army during its occupation to Lebanon.

They also said that the director was previously honored by an Israeli university.

Around 150 people signed a document demanding the CIFF to back down on its plan to award Lelouch, threatening to boycott the festival in case the CIFF didn’t respond to their demands, which comes in support for the Palestinian case and a rejection to celebrating artists who cooperated with Israel.

President of CIFF Mohamed Hefzy told Al-Masry Al-Youm that he would issue an official statement clarifying the reasons behind the decision in canceling Lelouch’s honoring.

Arabic media shows what happened behind the scenes, and it is clear that Lelouch was criticized by being Jewish as much as being pro-Israel.

Immediately after the announcement of the honor to Lelouch, a number of filmmakers objected to the presence of the French director in Cairo and to celebrate it, saying that not only is he a Jew, but also a supporter of Israel’s political positions. He said he loved Israel.

Festival president Mohamed Hafez defended Lelouche in a statement last Tuesday. he noted hat many of the world’s filmmakers are Jews, many are sympathetic to Israel. He said that Lelouch he did not have a hostile attitude to Arabs or peace. “Not every director or artist who has visited Israel considers himself an enemy of the Arabs. If we acted in this way, we would end up in isolation and only addressing ourselves, especially since Claude Lelouche loves Egypt and welcomed the honor and wants to attend the Cairo Festival,” Hafez said.

The pressure mounted though and very quickly the Supreme Advisory Committee of the Cairo International Film Festival issued a statement on Wednesday urging anyone to provide any proof whatspever that would prove that Lelouch was a Zionist or was against Palestinian or Arab rights. They pretty much begged for a reason to turn down the honor, knowing that they didn’t have enough, and the prestige of the festival was on the line.

Meanwhile the antisemitic filmmakers and “intellectuals” issued another statement Wednesday evening, announcing their objection to this honor. They also declared their rejection of all forms of “normalization” with Israel “or support for anyone who supports the brutal Zionist enemy until the Arab lands are liberated.”

The film festival organizers, meanwhile, found the “smoking gun” evidence that they were seeking giving them cover for rescinding the honor. In 1990, Lelouche visited Israel along with 250 Russian Jewish immigrants and 250 French donors to the Keren Or organization that helps kids with multiple disabilities. During that visit he, along with violinist Ivry Gitlis did “parachute training” with the IDF, and were captured in this picture while clowning around. 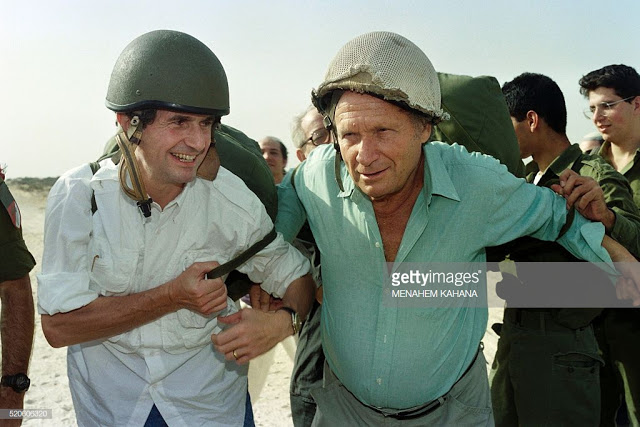 That was the excuse that the festival organizers were looking for. On Thursday night, the news was leaked that the honor was canceled.

It is clear that Lelouche’s Judaism was the main reason for the initial complaints. After all, Sylvester Stallone – who is a supporter of Israel – was honored at a different Egyptian film festival recently without any objection.