I tweeted this on Friday:

The pattern:
Before:
“ZIONISM IS RACISM! ISRAELIS ARE NAZIS! APARTHEID! THEY POISON PALESTINIAN WATER, STEAL ORGANS AND ENJOY KILLING BABIES! I CAN UNDERSTAND ARMED RESISTANCE! JEWS ARE WHITE SUPREMACISTS!”

“What’s the fuss? All I did was legitimate criticism of Israel.”

I had in mind last week’s episode where the Women’s March appointed Zahra Billoo to be on its board and then her rabid anti-Israel posts were uncovered, for example:

Last year she said, ” I am clear about I am not going to legitimize a country that I don’t believe has a right to exist. “
This isn’t criticism. This is unhinged hate for the Jewish state, calling for its destruction and proudly showing support for terror against Jewish civilians.

But when the Women’s March changed its mind about the appointment, she suddenly says that she is the victim of a smear campaign – she only “challenges the occupation:” 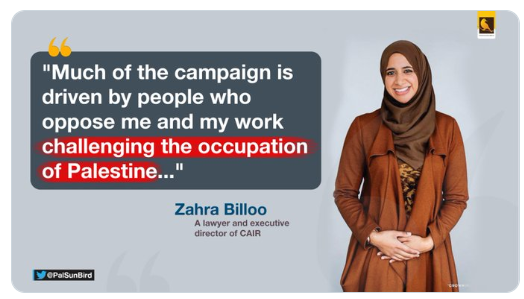 Her words show that she is a liar, but her fans that hate both Israel and Jews who do not want to be second class citizens flocked to her defense – the same defense we always see: “Oh, this is just legitimate criticism, and you are falsely accusing us of antisemitism.”

No other state in the world is ever told it shouldn’t exist. No other state is falsely represented as being guilty of apartheid. In no other case are people who shoot rockets at civilians lauded by people who otherwise swear they support human rights. And disgustingly comparing Israel to Nazis has only one purpose: to hurt Jews.

Yes, this is antisemitism. And claiming that it is mere opposition to Israeli government policies or “challenging the occupation” is meant to be a smokescreen to blind the world to the obvious, vicious and psychopathic hate that these people have – hate so vicious that its only historical comparison is to “old” antisemitism.