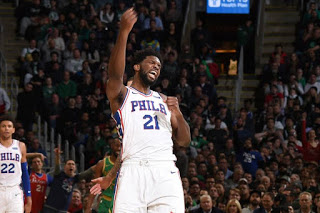 Joel Embiid is a basketball star for the Philadelphia 76ers.

Even though everyone recognizes that he has incredible talent, for most of this season he has been playing well, but not at superstar level.

From the Philadelphia Inquirer:

Joel Embiid had a phone call to make. The Sixers were shipping up to Boston, headed for a showdown with the second-place Celtics, but first the big man needed to clear his mind.

The night before, former NBA greats Shaquille O’Neal and Charles Barkley had made headlines with their blistering critiques of Embiid’s performance during TNT’s broadcast of the Sixers win over the Nuggets. He wasn’t living up to his potential, they said. He was playing as if he was satisfied with being good, instead of yearning to be great. It was the sort of criticism that can dampen a soul: not doubt, or diminishment, but disappointment.

Then a funny thing happened. Embiid listened to their words and found himself agreeing. So instead of cursing or brooding, he picked up the phone. He dialed O’Neal’s number. He assured the Hall of Famer that he was not mad. And then he asked for advice.

“I just wanted to talk to him,” Embiid said. “I’ve been kind of frustrated. … He was just telling me, ‘Be aggressive. You’re the guy. So just go out there and dominate.’ ”

Twenty-four hours later, that’s exactly what he did. In a 115-109 win over the Celtics on a frigid New England night, the player Embiid’s critics have been clamoring to see returned with a vengeance.

This 25 year old seven footer from Cameroon has more maturity than the entire British Left, it seems.

Embiid heard criticism, looked inside himself and found it to be valid, and worked on himself to fix the issue. That is called maturity.

Compare to how the British Left is acting today.

In the wake of the UK Labour Party drubbing at the polls, Jeremy Corbyn’s fans are doing everything they can to blame everyone else but the party leader for his abysmal performance. 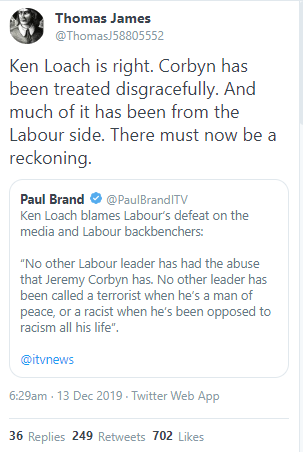 And it isn’t only British fans of Corbyn:

Wow. French politician Melenchon blames the loss of Labour on “stupid accusations of antisemitism” brought up by chief rabbi and on “Likud Networks” – extreme party of Netanyahu. https://t.co/kG9MIezn7X

This is a side effect of how the Left views the world. To them, victimhood equals righteousness. Corbyn’s loss isn’t his fault – it is his critics who are the bad guys. He’s an innocent victim.

The bigger the victim, the more they are considered to be right. It is absurd and illogical and it has brought many problems into the world, as too many people decide that being professional victims is the best way to go through life.  (cough, cough, palestinians, cough.)

This explains Leftist antisemitism. Jews are generally successful and always want to improve. The exact opposite of the victims that the Left canonizes.

They have no self reflection. No sober accounting of one’s faults. Being a victim is the best thing to be, and doing something to improve yourself takes you out of that wonderful, warm place where people can tell you how the people who beat you are terrible and you did nothing wrong.

They can learn a great deal from Joel Embiid.

Taking responsibility is something every child should be taught from birth. The Left in Britain, and seemingly the US as well, have forgotten that basic life lesson and blame everything on “the other” – Trump, Israel, “neocons,” whatever.