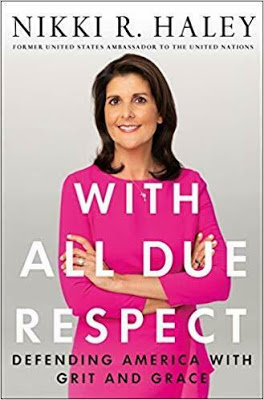 Nikki Haley’s “With All Due Respect” is not exactly an autobiography. Instead, it is an account of her life as the governor of South Carolina and as the United States Ambassador to the UN, with attention paid to specific crises and events and how she handled them.

The first major crisis was the racist mass murder at the AME Church in Charleston, and Haley’s attempts to ensure that things don’t get out of hand – not least from national media who parachuted in with the assumption that South Carolina is a bigoted Southern state and this event reflects that bigotry. Haley herself, whose parents are from India, proves that this is not the case.

Haley shows a strong moral sense throughout the book, and a willingness to fight for what is right. She inherited a good ol’ boys network where votes in the South Carolina legislature were done with voice only so there was no accountability as to who voted for what – including pay raises. She was blackballed from various committees when she tried to fight that system when she was in the legislature.

During the 2016 Republican primary race, Haley supported fellow child of immigrants Marco Rubio. She tangled with Donald Trump when she was campaigning for Rubio and called on Trump to release his tax returns; Trump tweeted that “The people of South Carolina are embarrassed by Nikki Haley!” She tweeted back with “Bless your heart,” essentially a Southern woman code unmistakably meaning “screw you” in the most polite way possible. She says Trump respected her after that.

After he was elected, Trump first asked Haley to consider being Secretary of State, a position she knew she was not qualified for and told him that. Shortly thereafter he offered her the UN ambassadorship. Haley’s response indicates a lot about her – and about Trump.

She said she would do it under three conditions: that she become a full cabinet member, that she become a member of the NSC, and that she could say what she thinks. She didn’t want to report to anyone but Trump himself and she wanted a say in all policy decisions. Trump immediately agreed to all the conditions.

This served her well, but it meant that Trump had at least two representatives who could make foreign policy decisions independently of each other, Haley and Secretary of State Rex Tillerson. If there is any villain in this book, it is Tillerson, who kept trying to undermine Haley and who worked with White House Chief of Staff John Kelly to undermine the President, trying to recruit her. But a quote later in the book from Kelly laid out the problem: there were four “secretaries of state:” Haley, Tillerson, Jared Kushner and National Security Adviser H.R. McMaster. Haley doesn’t spell it out but there was no real guidance from the White House to sync up their messages, and this is a severe shortcoming from a president who styles himself as an expert on business.

Haley was empowered, and she would often call Trump to make sure he agreed with her – although she makes it clear that she sometimes they disagreed. But from Haley’s position at the UN, the US is meant to lead a world that is hungry for leadership, and it is meant to push for human rights throughout the world. Neither of these are what Donald Trump is known for, although he has done things behind the scenes for human rights that he does not get credit for – Haley points out how the Obama White House would promise to promote human rights in Syria or Crimea, but they did little, while the Trump administration did far more to punish human rights violators and attack Syrian chemical weapons factories.

She and the President agreed on other tenets of Haley’s work at the UN: the US will not throw its friends under the bus as Obama did with Israel, and the US will start demanding its friends act like friends at the UN. She excoriated Obama not only for abstaining in the UNSC resolution 2334 against Israel, but also for abstaining in an annual General Assembly vote blaming the US for the poverty and oppression of the Cuban people.

Obama didn’t even want to defend the US on something that outrageous. He thought if the US goes along with the rest of the world, everyone else will like the US better. Haley knows what every thinking person knows – if you don’t respect yourself, no one will respect you.

Surprisingly, Haley was not a flag-waving Zionist before she was appointed to the UN. All she knew was that Israel was America’s friend and that friends have each other’s backs. As she took her crash course in international affairs, she realized that Israel was usually right in its positions; she concisely takes apart UNRWA in the book, for example. She pushed hard for moving the US embassy in Israel to Jerusalem over the objections of Tillerson and Kelly.

There is much more – how she negotiated with China and Russia to get the UN Security Council to impose sanctions on North Korea; how she tangled with Tillerson on ending the bad Iran nuclear deal, how she called Trump after his statements of “fine people on both sides” after the Charlottesville killings and told him that his job was to heal the wounds of racism, not to stoke them, how she responded when being thrown under the bus for a screw-up where she announced one thing on Face the Nation when asked to by the White House but Trump changed his mind and the White House said perhaps she was “confused.” “With all due respect, I don’t get confused” was her sound bite response.

It is a little hard to believe Haley when she says that she left the UN on her own and not in frustration of working with a dysfunctional administration. After all, she brought her own team to be her staff at the UN from South Carolina and they moved their families to New York with the expectation of being there for longer than they were.

She clearly doesn’t want to pick a fight with Trump and treats him with respect throughout the book. Many of her defenses of him ring true. But while she downplays her differences with the President, one gets the impression that there was more there than she writes.

Altogether, my already high opinion of Haley has gone up. I hope she does run for President in 2024 (honestly, I wish she would run now!) Haley’s America is one that we can all aspire to be a part of.