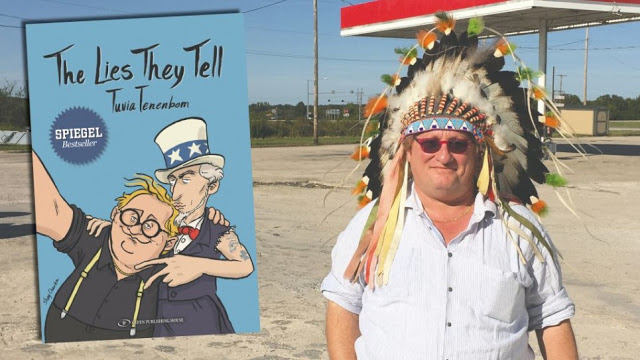 As I read “The Lies They Tell,” Tuvia Tenenbom’s account of his visiting some 28 of the 50 United States over the course of about a year, I found myself thinking of two disparate classics of pop culture..

The first is Simon and Garfunkel’s classic “America“, a song about a road trip to find the real America.

The other is Columbo, the character played by the late Peter Falk, whose rumpled, seemingly distracted and always underestimated detective always gets to the bottom of the crime.

Tenenbom is Columbo, and he unearths a much more cynical take on Americans than Paul Simon’s summary of them being “empty and aching.”

As he did in his book “Catch the Jew” Tenenbom travels through a country – this time, the United States – and talks to everyone who catches his fancy to better understand what America is all about.

Tenenbom visits the “Red Zone” of Detroit, a neighborhood where black people shoot each other for little reason. Tenenbom notes, “There are countless Western humanitarian organizations, funded to the tune of billions, that send activists all over the world to improve the lot of the downtrodden. why aren’t they here?” It turns out that Detroit has dozens of similar hopeless crime-riddled neighborhoods.

In a similar vein, Tenenbom visits the equally dismal Englewood district of Chicago that Barack Obama claims to have helped out so much while he was organizing communities. It is a hellhole where gangs rule and people are afraid. No one can name a single thing that improved since Obama claims he helped them so much. Police, heavily armed and armored, are aghast that Tenenbom is there, strongly urging him  to leave as soon as possible.

But Tenenbom also visits vapid  liberal intellectuals in Fargo, gun collectors and prisoners in Wisconsin, cowboys (or echoes of cowboys) in Montana, Seattle yuppies who pretend to care about the downtrodden but who ignore the huge number of homeless people on their streets, Native American reservations where no one knows anything about their own history as they spend their days in a drunken stupor, the Henry Ford Museum where even the helpful databases have been purged of the word “Jew” to whitewash his antisemitism, black churches where Tenenbom is transported by the music and beauty as he contrasts it to the black gangs who kill each other when they don’t like how they are looked at.

Tuvia is, many times, taken by the beauty of the land even as he is frustrated, amused and angry at its citizens. He has poetic descriptions of glaciers in Alaska, canyons and mountains and geysers in the West and the prairie in Kansas.

Tenenbom also finds a lot of people with strong opinions on Jews and Israel, views that are not always in concert. A “Jewish Voice for Peace” member in Washington, DC calls him a “fucking filthy Jew” but won’t repeat it on camera, claiming only to be pro-Palestinian. A Somalian in Seattle admires Hitler because he killed Jews. A Jewish mayor in Alaska admits, under Tenenbom’s probing questions, that there is right-wing antisemitism in his state. Lots of people who say in the same breath that they care about climate change and Palestine. Very few who know the first thing about Palestine; complaining about “Jewish settlers in Gaza” or how “the State of Israel replaced the State of Palestine.” American Jewish liberal synagogues more interested in demonizing Israel than supporting the Jewish state. Christian leaders who support Israel but say Jews will all go to hell.

He also finds many Jews who are against Israel and who are very, very concerned about black and racism, especially in the aftermath of the Dylann Roof murders. He cannot find any blacks who give a damn about antisemitism, though.

In the beginning of the book, Tenenbom speaks with outgoing ADL head Abe Foxman, who says that his own surveys find only 10-12% of Americans are antisemitic, but he knows that Tenenbom will find a higher percentage than that, because Tuvia knows how to make people lose their inhibitions. Not only is Foxman exactly correct, but the entire book shows how scared Americans are to say their real opinions on anything. The America that Tenenbom discovers is walking on eggshells, celebrating “freedom” and “liberty” but afraid to express themselves or to offend anyone.

Tenenbom makes a quick detour into Mexico where he sees many people who all look like they belong to the same tribe and who are comfortable in their own skin and their own land. The American melting pot, on the other hand, puts Americans on edge. As he puts it, “Through the process of forcibly dumping its citizens into a giant boiling pot of diversity and shaming them if they are not proud of it, America’s democracy succeeded in instilling fear in the minds of its citizens and effectively created a stench of segregation that reaches the highest heavens…..A telling effect of the forced melting pot is the majority of Americans who are afraid to share their political and religious views with strangers. In the Land of the Free, the Brave are quiet.”

The book is filled with biting observations that do not discriminate between right and left, black and white. For example, he describes gentrification in Dallas:

The new residents, whites, are often self-described liberals or progressive liberals who tell anybody listening that they dedicate their lives to helping the poor blacks and Spanish of America. In reality, they are the very ones who drive the blacks and the Spanish into homelessness. To blind you, and themselves, to this reality, they frequent a local bar where a black guy plays the blues, and they feel really, really good and really, really liberal.

Or this description of American Judaism:


People who dedicate their resources to help others and to fight themselves are doomed to succeed on both fronts.

This book is well worth reading.