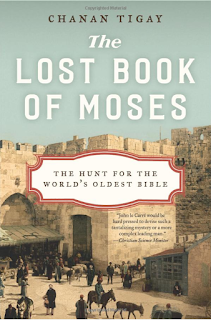 A previously unknown Biblical scroll, found by Arabs in clay jars in the desert, that is many centuries older than any known original Biblical text, and with some significant variations on the text itself from what we know.

It sounds like the Dead Sea Scrolls. But this find pre-dates the Scrolls by some seventy years.

A Jewish convert to Christianity who dealt with rare books and archaeological objects in the 1870s, Moses Wilhem Shapira, made that fantastic claim and was a celebrity in London for a few weeks while his find was scrutinized by an expert hired by the British Museum. Eventually he declared the scroll to be a fraud. Demoralized, depressed and disgraced, Shapira committed suicide not long after.

But after the Dead Sea Scrolls were discovered and authenticated, with a remarkably similar backstory, people have wondered – could the Deuteronomy scroll claimed by Shapira have really been legitimate? Could the experts at the time have been wrong? Now we have much better scientific methods of determining the age of old objects – could this case be re-opened?

Chanan Tigay, a journalist and creative writing instructor, became obsessed with finding the answers to these questions. The presumably fraudulent scrolls had disappeared and presumed lost in a fire, but Tigay uncovered more and more information that showed that perhaps the standard story was not really true. Could there be another ancient Biblical scroll whose value would be unfathomable sitting in some dusty library or museum? Also, every expert consulted agreed that even if it was a fraud, it was a very clever one. Who would have even considered creating an alternate version of Deuteronomy at a time that no one was aware of any variants on the Torah save for the Samaritan version?

This is a very entertaining book, part a biography of Shapira that Tigay painstakingly researched (much helped by his daughter’s autobiographical novel) and part the story of Tigay’s search, as he uncovers virtually every angle possible to find either the scroll or definitive evidence of what happened to it and whether it was legitimate. Tigay is almost obsessed and no detail is too small for him to follow up – and, often, to travel worldwide – to unearth more clues.

(I could only think of one thing Tigay didn’t do, where he found an actual photo of the scroll in the British Museum but it was impossible to read so he felt that was a dead end. I wondered why he didn’t enlist an expert in trying to tease out the text from the photo, something that can be done nowadays.)

In the end, it looks like he found the real answer about the scroll.

But the conclusion isn’t the point. The fun of reading this book is the journeys, both Shapira’s and Tigay’s.

If you are looking for something different to read over Passover, this is an enjoyable read.