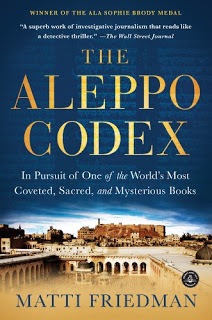 I love Matti Friedman and decided I want to read all of his books. I had already read “Spies of No Country,” although I didn’t review it, and I recently ordered The Aleppo Codex and Pumpkinflowers.

The Aleppo Codex, circa 930 CE, is one of the most important books ever written. It was an attempt to codify the entire Hebrew Scripture, with all vowel marks and cantillation marks, as a single standard, since Torahs are written without vowels and they were only known by tradition.

Friedman’s book runs through two parallel histories. One is the actual history of the codex, as it was written in the Galilee and then traveled to Jerusalem, where Crusaders held it for ransom which was paid by rich Egyptian Jews. It was then brought to Cairo, used as a reference by Maimonides, and then made its way to Aleppo, Syria, where the community zealously guarded it for centuries. Friedman brings the details to light, including the theory that the writer of the Codex was in fact a Karaite and not a Rabbinic scholar.

The other history is what happened to the codex in the days and years after the UN voted to partition Palestine. The official story is that crazed Arab antisemites destroyed the synagogue and burned its contents, including the Codex, and the surviving pages were smuggled to Israel where it was entrusted to the State.

The reality is much more complex, and much messier. Friedman spent a great deal of time trying to break the wall of silence by the Syrian Jewish community surrounding the codex. They regarded the book as a talisman that would protect them.

Friedman unravels much of the mystery, but not all of it.

The story is not complimentary to the State of Israel. The Syrian community did not want to part with the book and Israel managed to take it from their members with a combination of subterfuge and an unfair, secret trial. Anti-Mizrahi racism underlies a lot of the plot.

The remaining mystery is what happened to most of the missing pages. They were not burnt, as had been assumed, but nearly all of the Pentateuch is missing – yet the book appears to have been largely intact with perhaps only a few missing pages when it was retrieved after the pogroms. The Syrian community remains mum on that issue, with rumors of some people having individual pages that they still use as a mystic protection.

The one man who may have possessed the bulk of the missing pages, a haredi rare book dealer, was murdered in 1989. The trail goes cold after that.

Friedman is a gifted storyteller as well as a dogged reporter. He brings to life the Crusader siege of Jerusalem, with Muslims and Jews both defending the city, as much as he describes the events of 1947 and later.  Although much of the mystery remains, he has brought to light a great deal about the Aleppo Codex that was hushed up by both Israel and the Syrian Jewish communities of Israel and abroad.  As always with Friedman, The Aleppo Codex is a very worthwhile read.