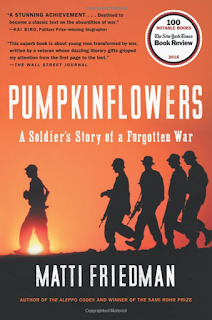 I am very behind in my book reviews, and I need to write them before I forget the books!

Pumpkinflowers is a truly great book. It tells the story of the tail end of Israel’s first Lebanon war, from first person perspectives of the soldiers who were defending one specific unremarkable hill in Lebanon, named Pumpkin, that was deemed critical at the time.

Friedman is an excellent storyteller and a really great writer. It is clear that he is also a fantastic researcher as well, in putting together sources to build a seamless story, especially in the first section of the book.

That section describes Avi, a soldier at the Pumpkin who was sent there soon after what was known as the Pumpkin Incident, where Hezbollah attacked the soldiers there and for a brief time put up a Hezbolah flag – and then publicized it. It was an early example of how a militarily meaningless action can become a great victory in the public relations war, and it showed how warfare itself is changing.

Avi’s story is told in his own words and ends in a very unexpected and heartbreaking way which highlights Friedman’s considerable writing talent.

The second part of the book is Friedman’s own story as a young soldier at the Pumpkin.  Here he really has a chance to show off his talent of observation. It is the story of the mundane, highly regimented life of low-level soldiers, following orders to obtain objectives they cannot possibly understand, with weeks of boredom punctuated with occasional dangerous and deadly incidents.

Yet it is much more than that, because that story of the soldiers at Pumpkin is the story of Israel in Lebanon at large, at a point where no one wanted to talk about it. This was during the Oslo process and people were intoxicated at the idea that peace was possible. The low level Lebanon quagmire was an embarrassing sideshow, yet there were real actors in that show, some who died way too young.

In the final part of the book, Friedman narrates his final visit to Pumpkin, coming as an American tourist to Lebanon a few years later, trying to understand what it all meant.

I’m not doing the book justice in this review. Just read it.