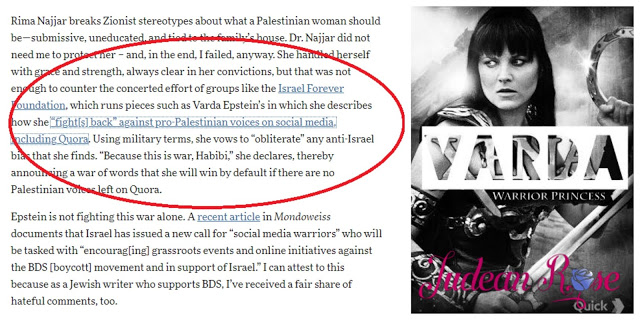 Benay Blend has written a kvetchy little piece on the antisemitic Mondoweiss about how her Arab friend Rima Najjar got banned from Quora. Blend would have us believe that Najjar’s voice is being silenced because of her “national origin.” She suggests there is a concerted effort to still voices such as Najjar’s citing a piece I wrote some years back called “Quora: The New Battlefront for Israel.”
The piece appears on the Israel Forever Foundation website, the brainchild of Dr. Elana Yael Heideman. I met Dr. Heideman at a bloggers meet-up about 5 years ago. She was getting ready to launch her website and was looking for content that showed a love of Israel. Elana didn’t care if I were right or left-wing, Haredi or Reform. All she cared about was whether I had something true and nice to say about Israel.
Elana Heideman’s belief was that Jews were too concerned with what divided us and needed to focus more on what we shared. She wanted us to get back to that basic connection that we have as a people, and she believed the key to that connection was Israel. A love for Israel was something we shared, no matter our different backgrounds.
I liked the concept and so, from time to time, I’d write something up for her website. These pieces were always written from the standpoint of unapologetic love for Israel. Because that is the entire thrust of the Israel Forever Foundation, and a writer always tailors the writing to the venue.
Blend, on the other hand, would have you believe that the Israel Forever Foundation and those of us who volunteer our time and content there, are a sort of militia, aimed at robbing others of their right to free speech. Of Najjar’s banishment from Quora, Blend writes:

She handled herself with grace and strength, always clear in her convictions, but that was not enough to counter the concerted effort of groups like the Israel Forever Foundation, which runs pieces such as Varda Epstein’s in which she describes how she “fight[s] back” against pro-Palestinian voices on social media, including Quora. Using military terms, she vows to “obliterate” any anti-Israel bias that she finds. “Because this is war, Habibi,” she declares, thereby announcing a war of words that she will win by default if there are no Palestinian voices left on Quora.
This, of course, is a distortion of the truth, or an outright lie. It is certainly lacking in context. From the perspective of the Israel Forever Foundation and from my own perspective, Najjar is free to say whatever she likes. She is even free to lie, because the Israel Forever Foundation isn’t concerned with freedom of speech issues or in silencing dissent.
I asked Elana Heideman to sum up the purpose of the Israel Forever Foundation: why she does what she does. She wrote:
Israel Forever was created to bridge the gap in knowledge, understanding, and engagement with Israel as a vital and vibrant element of Jewish life and identity. With the growing hate rhetoric, lies and demonization of Israel and Jews, our content and resources are our contribution to educators, parents, youth or community leaders, or anyone wanting to strengthen their connection or activism opportunities. Whether in social media or in person, we all must do all we can to equip and empower people to know and protect Jewish history, rights and freedom – in Israel and everywhere in the world – today, tomorrow and FOREVER.
I don’t see anything in there about silencing voices or silencing dissent. The purpose of the Israel Forever Foundation, rather, is to offer a resource to strengthen Jewish identity. It’s to encourage people to take an active stand against the lies we see from people like Blend by coming back at them with the truth.
The Israel Forever Foundation is not meant to silence or divide. It is meant to draw the Jewish people closer together. It’s certainly not about silencing “pro-Palestinian voices.”
As for me, I don’t fight against voices. I fight against lies, with words.
It would not occur to me to “obliterate” a voice, and I wouldn’t even know how.
I would, on the other hand, do everything in my power to obliterate anti-Israel bias, whenever and wherever it is encountered, such as the bias we see in Blend’s Mondoweiss piece. An example of such bias is her reference to my use of “military terms.”
Here were the “military terms” I used:
I want to answer that [anti-Israel Quora question] in such a way that my Israel-loving bias will obliterate the anti-Israel bias expressed in that question. Because this is war, Habibi.
And true love will always win out. 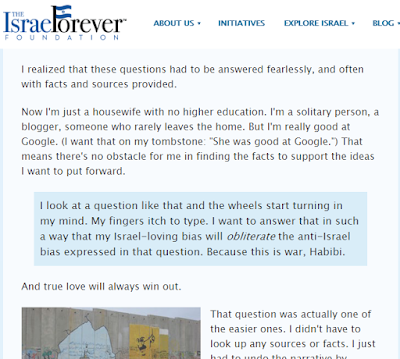 Najjar is getting ready to sue Quora. Her lawyer says that the ban imposed on her by Quora is “based solely on ‘her advocacy for Palestinian rights through her opposition to Zionism’ and for ‘unlawfully deny[ing] her access to a place of public accommodation on the basis of Dr. Najjar’s national origin.’”
But nowhere in Blend’s piece does she offer any proof that Najjar’s ban is based on discrimination. Instead, Blend says that being Jewish, she, Blend, would say exactly what Najjar wanted to say, but when she said it, Quora often, though not always, let it through. It was only when Najjar said the same things that the content was removed and the ban imposed.
My answers were not targeted near as often as her writing. This would seem to support the contention that her ban was a case of censorship partly due to her national origin. Her content, which countered the Zionist “narrative” so long imposed on the struggle for justice in Palestine, was a problem for those busily disseminating hasbara content. Being philosophically and politically in agreement, she and I collaborated in answering questions. More often than not, Dr. Najjar edited my writing so that the ideas stood out more clearly. And yet, I was never a target of attacks that she received.
If Blend and Najjar have spent as much time on Quora as Blend suggests, then they know that this is not how Quora works. Any user can report a response or comment, adding a detailed complaint. Eventually a Quora moderator looks at the report and decides whether or not the material should be hidden, removed, or left alone.
Some Quorans do use the report feature to target those with whom they disagree. But that targeting works both ways: many of my responses and comments have been targeted in exactly this manner. Sometimes I win on appeal. Sometimes I don’t. A lot of my content has been hidden or removed.

It’s not just one side, not just Najjar, and not just me, either. One of my sons ended up with a lifetime ban just like Najjar’s for his Israel advocacy.
Because that’s how it works: if enough of your responses and comments are troublesome—meaning if enough users complain about you—Quora will ban you for life.
This is clearly what happened with Najjar.
Now when I don’t win, I move on. I say, “Those are the breaks.” It has never occurred to me to sue Quora, though, from time to time, I have suspected an individual moderator of anti-Israel bias.
In my case, I am often certain that a Quoran with an anti-Israel bias is using the report mechanism to silence my voice. But when it happens, I don’t then get up on a soapbox and accuse people of employing “military terms” to obliterate pro-Israel voices. I just buck up and keep on keeping on.
Najjar and her Jewish spokesperson, from my perspective, seem to be drowning in litigious self-pity or perhaps just plain old sour grapes. It can be rough out there on Quora. I don’t always like the rules. For instance, I try not to use the word “Palestinian,” because I don’t believe there is a distinct people known by this term. If I instead use the word “Arab,” someone will report me. The same is true of Facebook.
This isn’t fair, of course. But it’s how Quora and Facebook want it. If you want to play, you have to obey.
Najjar, in short, was not banned because of some inherent bias against her “national origins.” She was banned because she used language that offended people and violated Quora policies. Had she not done so and not been banned for life, Najjar might have discovered, as I have, that there is always a workaround: a way to tailor language to satisfy Quora specifications.
With a bit more creativity, Najjar might yet have been free to speak her mind on Quora. But since she was not more creative, and offended people, she is not free to speak her mind on Quora. And perhaps Najjar ought to take responsibility for that, instead of hiring lawyers and having her Jewish friend complain about me and the Israel Forever Foundation—who have nothing whatsoever to do with Najjar’s apparent lack of control—on Mondoweiss.

UPDATE: Before this piece was even published, another article appeared by Blend, making the same accusations, and using my Israel Forever Foundation article as an example of the “concerted campaign of harassment and censorship by Zionists and Israelis” that is targeting Najjar “for her content.” Here she goes into even more detail, and winds up by suggesting that this “campaign” is at the behest of the Israeli government.