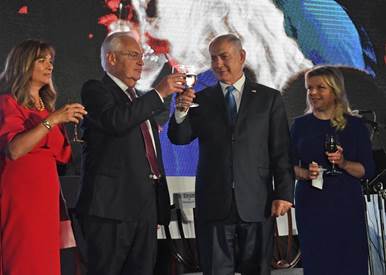 “Ambassador Friedman and Mrs. Friedman, David, Tammy, Sara and I are so delighted to be with you and all the distinguished guests who are here. I have to tell you, David, your Hebrew is very good, and I’ll note that you had your Bar Mitzvah in Israel, I had my Bar Mitzvah in America – the twist of fate.

This is a great day, and I want to say first, Happy Birthday, USA!

Three years prior to America’s independence, the Sons of Liberty gathered in Boston harbor. They boarded tall ships and cast chests of tea overboard. The principle for which they fought, no taxation without representation, changed the world.

I believe in limited taxation with representation, but great idea which brought into being all the philosophies of the enlightenment and the ancient ideas of freedom born in this country, this brought together the United States, and on July 4th, 1776, the United States was born: A nation conceived in liberty, dedicated to the proposition that all men – they later added all women too – are created equal.

Two hundred years later, to the day, on July 4th, 1976, I received the shattering news that my brother Yoni was killed securing the freedom of the hostages held at Entebbe. This was the darkest moment of my life, the life of my brother, most of all my parents. I’ve always remembered the fallen sons of Israel, the grief that accompanies the parents of our young heroes, like Hadar Goldin and Oron Shaul, and we are committed to bring them home. We will bring them home.

Two centuries separate July 4th, 1776, and July 4th, 1976, but to me, they are unified by a common ideal: The fight for freedom. I am reminded of that parallel every year at this time. Israel and America are two bastions of liberty defending our common civilization.

Today I stood on another tall ship, a tall ship of liberty. Tall is an understatement – it’s huge, not only in length but in bulk. The USS George H.W. Bush, a massive aircraft carrier anchored just outside of Haifa. It’s a floating piece of America. It’s a floating island that helps lead the fight against ISIS.

I told the members of this crew a few hours ago that Israel is also an aircraft carrier. It’s an aircraft carrier for Western civilization, for the civilization of freedom. Our two democracies prize individual choice and respect for all. Ours are peace-loving peoples that seek neither war nor conquest, but we know, David, as you’ve just said, we know that for peace to endure, we must be prepared to defend it, and we must be prepared to defend ourselves against those who would seek to destroy us.

It is ultimately not these magnificent ships or planes that keep us safe, it’s the indomitable spirit of our people and the justice of our cause.

I was so impressed, as was Sara, when we stood there, and you must have seen this, David, You saw the great partnership between the American crew, the commanders, the pilots, the crew members and their Israeli counterparts. You can see a real friendship, a real personal friendship that is born of these common ideals.

That bond between us was so evident in the historic visit of President Trump to Israel. President Trump was the first US president who chose to make his first foreign trip to Israel. We will always remember that. His speech at the Israel Museum left an indelible mark. I’ve spoken to many Israelis, they said they were so uplifted by this speech, by his spirit of friendship, the spirit of solidarity that the President expressed with Israel. We were all moved by that. When the President decided, as the first US sitting president, to visit the Western Wall, and he touched those stones, he touched our hearts, as did First Lady Melania, as did Jared and Ivanka.

I want to take this opportunity and say, I am committed and I remain committed to making every Jew feel at home in Israel, including at the Kotel. All we need is patience and perseverance. Patience, perseverance and courage is what the founders of America had in abundance.

I recently read an extraordinary biography of George Washington. What a leader he was. I never realized that at the height of his battle against the British Empire, the maximum number of troops that George Washington commanded was Chai – 18,000 – that’s it. You can imagine how much resilience and how much courage this man had and it represents the spirit of America ever since.

Our two nations stand shoulder to shoulder, as we have countless times before, in our noble fight for freedom.