Zena Agha, is a writer and a policy analyst at the Palestinian Policy Network Al-Shabaka, tries to fool Foreign Policy’s audience. 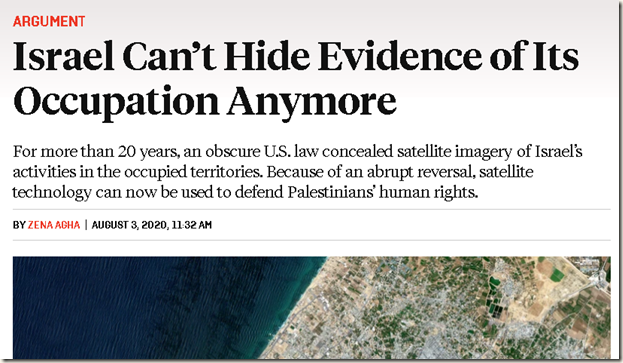 The upshot is that a US regulation that ensured that a 1996 law saying that high resolution satellite images of Israel are prohibited by American satellite companies has been changed to allow those better images – from 2 meters per pixel to 0.4 meters per pixel:

It is the difference between seeing the broad outline of a large building and being able to see individual vehicles parked outside. It is possible to identify substantial changes in land use (for instance, the building of city-size settlements or the bulldozing of Palestinian structures) at the two-meter limit, but subtler changes—such as the growth of outpost settlements or small military emplacements—are harder to discern. For 24 years, the legislation obfuscated the damaging effects of the Israeli occupation by literally hiding them from view.

The censorship over Israel and the occupied territories has had negative archeological, geographical, and humanitarian implications. Arguably the most glaring of these has been its effects on monitoring the decades long Israeli occupation—including documenting home demolitions, territorial disputes, and settlement growth. Lower-resolution imagery has forestalled efforts to challenge and verify human rights violations, especially in hard-to-reach areas such as the Gaza Strip, which has been under siege since 2007.

One of  smallest settlements by population, with less than 150 residents, is Mechora in the Jordan Valley. Here’s what it looks like in Google Earth: 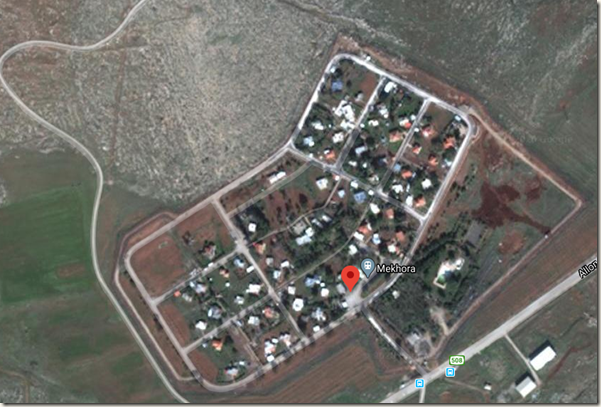 Is it remotely possible for Israel to “hide” even one house there, let alone the entire community? And when hardline rightists put a couple of trailers on land that was never settled before against Israeli law, they brag about it – they don’t try to hide it. Anyone from Peace Now can drive there and see it for themselves in much higher resolution than any satellite.

The thesis is even more absurd than that. No one in Israel is hiding any settlement activity anyway. Every building in the territories goes through multiple stages of approval, all of which are public.

Realizing that her main argument doesn’t hold water, Agha tries to scattershot other reasons why accurate satellite photos are important that also don’t withstand ten seconds of scrutiny. For example:

When it comes to climate change, high-resolution imagery will enable the more accurate detection of changes in vegetation, crop conditions, further spread of desertification (a key impact of climate change in the region), changes to water distribution, overuse of fertilizer, and pollution dumps—changes which are substantially harder to discern and record with low-resolution satellite imagery. For disciplines such as archaeology, it will help identify sites and monitor damage.

Somehow Israel managed to reverse desertification without the rest of the world peering at it in higher resolution.

More importantly, Zena Agha is implying that Israel wouldn’t be concerned with these issues on its own – that it needs Europeans or Americans to pore over these images to find evidence of pollution or overuse of fertilizer. It clearly doesn’t – Israel is perhaps the most environmentally aware nation on the planet, and any concerned scientist or activist can simply drive anywhere in Area C or put an inexpensive drone in the air to see everything in much more detail than even the best satellite image.

The security concern, which is downplayed by Agha, is that the higher resolutions can identify targets for Hamas and Hezbollah rockets more effectively.  For example, they might be able to identify populated areas without adequate rocket shelters to target, or the higher resolution can help them discern chemical plants from other factories that would not be as damaging if bombed.

In the end, this is not that big a deal because other nations were already taking the higher res images and selling them. That’s the reason the US decided to change the regulation; it no longer made sense. It isn’t great but it was inevitable. The real problem is that this Foreign Policy article is using this story as an excuse to bash Israel gratuitously, for example:

Significantly, the reversal empowers humanitarian groups working to hold Israel accountable for its violations of international law, including unlawful killings and settlement construction (which, under the fourth Geneva Convention, constitutes a war crime).

The satellite images cannot help for forensics work when Israel kills a terrorist. But Agha wanted to publish the phrase “unlawful killings” so she pretended they could.

However, higher resolution images can help show illegal Palestinian building all over, as they place new haphazard buildings in places they have no permission for, as I once documented in Google Earth images of an illegal Palestinian “settlement” near Kedar growing from 2004 to 2016:

This article that pretends that somehow the higher resolution images isn’t a security threat – but asserts that the new images will definitely show heretofore unknown Israeli war crimes – is a perfect example of media bias.

(It is also unethical for Foreign Policy to publish this article without noting that the author was personally involved in getting the legislation changed.)