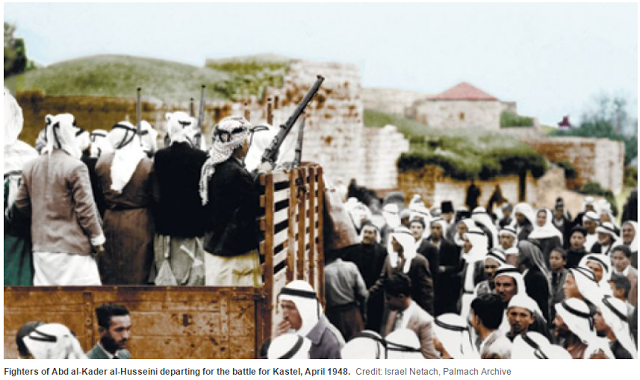 This Haaretz op-ed from Benny Morris is a must-read, since Morris is considered the godfather of Israeli revisionist historians and is quoted so often by Israel’s detractors.

Since it is behind a paywall, here is the entire article.

At the bottom of his piece last week “Netanyahu, this is what ethnic cleansing really looks like,” Prof. Daniel Blatman is described as a “historian.” In that case, Blatman betrayed his profession when he attributed to me things I have never claimed and distorted the events of the 1948 war.

First, throughout the article Blatman ignores the basic fact that the Palestinians were the ones who started the war when they rejected the UN compromise plan and embarked on hostile acts in which 1,800 Jews were killed between November 1947 and mid-May 1948. (In that, by the way, the Jews differ from the Serbs, who started the Yugoslav wars of the 1990s and did in fact carry out ethnic cleansing in Bosnia and elsewhere).

Regarding the second stage of the 1948 war, Blatman claims that the Arab countries invaded prestate Israel in order to rescue their Palestinian brothers from the ethnic cleansing that the Jews had launched, and that most of them attacked the new State of Israel in order to do this. During this alleged cleansing “over 400,000” Arabs – who according to Blatman made up over half the Palestinian Arab population – were expelled from their homes and forced to flee by May 14. (Actually, there were about 1.2 million to 1.3 million Arabs in the country at the time.)

The real number of those who fled and were forced to flee was apparently smaller, but more importantly, the Arab countries attacked the State of Israel largely to harm it, if not to destroy it. The fact is, their leaders threatened to invade even before the UN resolution was passed on November 29, 1947, and before a single Arab had been uprooted from his home. And they continued to threaten an invasion in the following months, until May 1948.

It wasn’t the tragedy of the Palestinians that motivated the Arab countries during their invasion. The truth is, the flight and expulsion of the Arabs from their homes in prestate Israel, especially from early April until May 14, 1948 (in that connection the capture of Jaffa, Tiberias and Haifa, and the Deir Yassin massacre have always been mentioned), fostered extremism among the Arab populations surrounding prestate Israel and were one reason Arab leaders decided to invade on the eve of May 15.
But more important factors influenced the Arab leaders in their decision; for example, Jordan’s King Abdullah wanted to expand his country’s borders, the Egyptian king wanted to deny the Jordanian king major territorial achievements, and the leaders of Syria, Iraq and Egypt feared the reaction at home if they did not invade. Concern for the welfare of the Arabs in prestate Israel was not the main motive for the Arab invasion.

According to Blatman, I claimed that “over half a year before the Arab invasion began” the leaders of the Yishuv, the Jewish community in Eretz Israel, aspired to expand the country’s borders beyond those decided on in the UN General Assembly resolution, “and to minimize the number” of Arabs who would remain in the Jewish state.

This is nonsense, a distortion of my words and of history. Of course, leaders in a country’s early years are interested in enlarging the country’s territory, but there’s a big difference between personal and political aspirations.

In political terms, the Yishuv’s leaders aspired to enlarge the area of the state in the making only beginning around March-April 1948, not starting in November 1947. And this happened only after four months of Arab combat against the Yishuv, which was staging a strategic defense. And it happened only after the Arab leaders stated clearly morning, noon and night that they intended to attack the Jewish state when the British left.

Regarding minimizing the number of Arabs, at no stage of the 1948 war was there a decision by the leadership of the Yishuv or the state to “expel the Arabs” – neither in the Jewish Agency nor in the Israeli government; neither in the Haganah General Staff nor in the Israel Defense Forces General Staff. Nor did any important party in the Yishuv, including the Revisionists, adopt such a policy in its platform.

It’s true that in the 1930s and early ‘40s David Ben-Gurion and Chaim Weizmann supported the transfer of Arabs from the area of the future Jewish state. But later they supported the UN decision, whose plan left more than 400,000 Arabs in place.

It’s also true that from a certain point during the war, Ben-Gurion let his officers understand that it was preferable for as few Arabs as possible to remain in the new country, but he never gave them an order “to expel the Arabs.” (In July 1948 he even decided against the expulsion of the Arabs of Nazareth, while he halfheartedly ordered the expulsion of the Arabs of Lod and Ramle.)

The atmosphere of transfer that prevailed in the country beginning in April 1948 was never translated into official policy – which is why there were officers who expelled Arabs and others who didn’t. Neither group was reprimanded or punished.

In the end, in 1948 about 160,000 Arabs remained in Israeli territory – a fifth of the population. Over the decades, this number has grown to 1.6 million. (This month their leaders decided not to attend the funeral of Shimon Peres, who tried to promote a compromise based on a two-state solution.)

If Blatman reads my books he’ll learn that already on March 24, 1948, Israel Galili, Ben-Gurion’s deputy in the future Defense Ministry and the head of the Haganah, ordered all the Haganah brigades not to uproot Arabs from the territory of the designated Jewish state. Things did change in early April due to the Yishuv’s shaky condition and the impending Arab invasion. But there was no overall expulsion policy – here they expelled people, there they didn’t, and for the most part the Arabs simply fled.

It’s true that in mid-1948 the new State of Israel adopted a policy of preventing the return of refugees – the same refugees who months and weeks earlier had tried to destroy the state in the making. But I still consider this policy logical and just.

I don’t accept the definition “ethnic cleansing” for what the Jews in prestate Israel did in 1948. (If you consider Lod and Ramle, maybe we can talk about partial ethnic cleansing.) And certainly there was no ethnic cleansing that was “one of the most successful of the 20th century,” as Blatman puts it.

In the end, 160,000 Arabs remained in Israeli territory, and not all those who tried to return from Arab countries after 1948 were expelled, as Blatman claims. Many were expelled, and many somehow returned, were allowed to stay and became citizens of the Jewish state.

Incidentally, Arab countries carried out ethnic cleansing and uprooted all the Jews, down to the last one, from any territory they captured in 1948 – for example, the Jordanians in Gush Etzion and Jerusalem’s Old City, and the Syrians in Masada, Sha’ar Hagolan and Mishmar Hayarden. The Jews, on the other hand, left Arabs in place in Haifa and Jaffa, and in the villages along the country’s main traffic arteries – the Jerusalem-Tel Aviv highway and the Tel Aviv-Haifa highway – a fact that does not conform with the claim of “successful” ethnic cleansing.

Regarding the current preoccupation with the subject, it’s absurd, to put it mildly, to claim that uprooting Jewish communities from the West Bank is “ethnic cleansing,” but there is logic to the presence of Jews in Arab areas, just as Arabs live in the Jewish state. In today’s circumstances, the settlement enterprise in Judea and Samaria is an obstacle to a possible peace between us and the Palestinians. I have always opposed this enterprise, because a division into two states for two peoples is the just and logical solution.

Unfortunately, Benjamin Netanyahu is right when he says the main obstacle to peace is the unwillingness of the Arabs on both sides of the Green Line to agree to a compromise based on two states for two peoples, and their rejection of the legitimacy of the Zionist enterprise and the State of Israel.

Other examples of Morris destroying others who pretend that history shows Israel’s birth to be the original sin: