Here is a letter to the editor in the New York Times from June 24, 1960, by the head of American Friends of the Middle East, Harold Minor: 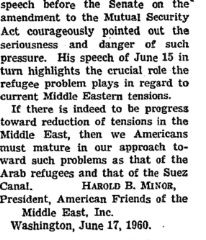 His points are:
– Any Arab intransigence is a result of Israeli actions
– The Palestinian [refugee] issue is the key issue in the entire Middle East, and if that problem would be solved, there would be no other problems
– The Arabs are justified in boycotting and blockading the Jewish state because of Israeli actions
– Certain parties, i.e., Jews, who speak out against this Arab aggression are engaging in propaganda
– Israel is in violation of UN resolutions, and should go back to the 1947 partition lines
– Arabs look at the US as being pro-Israel and not an honest broker, and the US has to pressure Israel to give up land and (West) Jerusalem and admit a million Palestinians in order to get back in the good graces of the Arabs

These arguments are now seen to be bizarre in retrospect – and yet anti-Israel forces are using slightly updated versions of these same arguments, today. Linkage was alive and well in 1960. Justifying boycotts of Israel was perfectly acceptable discourse. Claims that there can be no peace unless the US pressures Israel – we hear it today. Justifying all Arab aggression by pointing to imaginary Israeli crimes – just like today. (The Israeli Embassy in Washington wrote a good response that was published in the July 5, 1960 NYT pointing out the deceptions in this letter. )

But what is really interesting is that this American Friends of the Middle East was not a grassroots pro-Arab organization.

It was created by the CIA!

In 1951, [CIA Middle East official Kermit “Kim’] Roosevelt – together with two dozen pro-Arab American educators, theologians and writers, including Gildersleeve and Harry Emerson Fosdick – founded an anti-Zionist group called American Friends of the Middle East (AFME). It was Roosevelt who used his role at the CIA to ensure the organization would fund the group through the CIA and Aramco.

It was through groups like the AFME and anti-Zionist activists like Rabbi Elmer Berger, a leader of the American Council for Judaism, that the Roosevelts [Kermit and cousin Archie, also at the CIA] were able to shape the CIA’s prism of the Middle East. With Kim Roosevelt’s blessing, the AFME led the way in educating policy- makers, journalists and others as to the Middle Eastern “reality” – which coincided with their political biases.

As Wilford writes, “In December 1958, AFME drafted a pamphlet, ‘Story of a Purpose,’ which eloquently articulated the group’s founding values: sympathy towards Arab nationalism and the drive toward Arab unity, rejection of the last vestiges of colonialism and imperialism, and the belief that the Palestine Question is the very heart of the Middle East problems, requiring a US policy of friendly and sympathetic impartiality.”

While the PLO’s propaganda came straight from the Kremlin, American anti-Zionism has largely been shaped by Foggy Bottom.

What this letter also shows is that even if Israel would give in to today’s demands – there are plenty more demands waiting in the wings, and they were all used before 1967.