I’ve been thinking a bit about BDS lately. I started reading a book about BDS on campus by Andrew Pessin and Doron Ben-Atar and I gave a vehement rebuttal to those who believe that boycotting Israel is somehow related to justice for Palestinians.

.Over the weekend my thoughts distilled into this simple and accurate message which I tweeted: 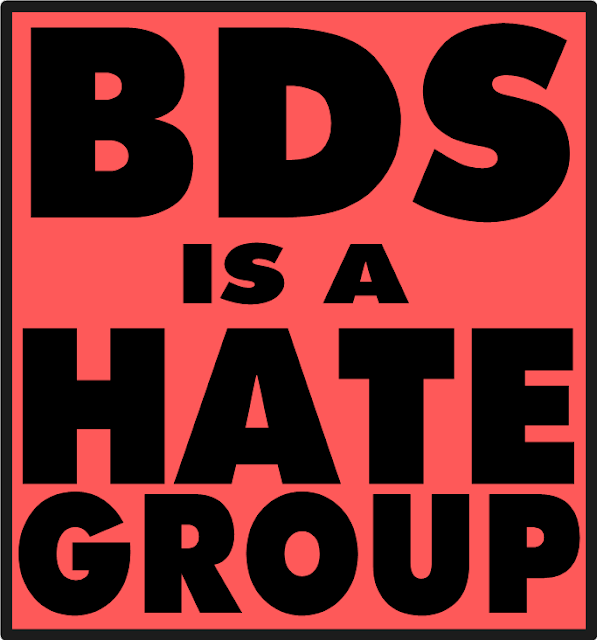 In liberal circles, there is nothing more heinous that a hate group. And the FBI as well as other organizations define discriminating against Israelis as hate.
From Wikipedia:

A hate group is a social group that advocates and practices hatred, hostility, or violence towards members of a race, ethnicity, nation, religion, gender, gender identity, sexual orientation or any other designated sector of society. According to the United States Federal Bureau of Investigation (FBI), a hate group’s “primary purpose is to promote animosity, hostility, and malice against persons belonging to a race, religion, disability, sexual orientation, or ethnicity/national origin which differs from that of the members of the organization.”

The Southern Poverty Law Center defines hate groups as those that “… have beliefs or practices that attack or malign an entire class of people, typically for their immutable characteristics.”

Any group that supports BDS goals  that Israelis, no matter what political stripe, must be boycotted, is by every definition a hate group. One doesn’t need to get into the argument of whether it is antisemitism or not – BDS by its own words fit the definition of a hate group against citizens and institutions that happen to be located in Israel.
The idea that BDS equals hate is a message that needs to be repeated over and over again, much the same way BDS itself repeats that Israel is an apartheid state. In this case, however, the statement is true.
A simple look at how unhinged the BDSers get when, say, an Israeli wins a song competition, shows that the movement has nothing to do with helping Palestinians and everything to do with lunatic, deep seated hate.
Spread the word.