Anna Baltzer writes for the “US Campaign for Palestinian Rights:”

Friends,
Last night, as I lit the menorah with my family for the sixth night of Hanukkah, I remembered how, in Palestine, Jewish holidays translate into escalating oppression of Palestinians. …I remembered the massive menorah erected by Israeli soldiers at the Zatara checkpoint between Ramallah and Nablus as a reminder to Palestinians of who was in charge and to whom Israel believes the land belongs – a grotesque cooptation of Jewish identity and symbols.

The story is illustrated with a photo of one of these supremely offensive menorahs “erected by Israeli soldiers:” 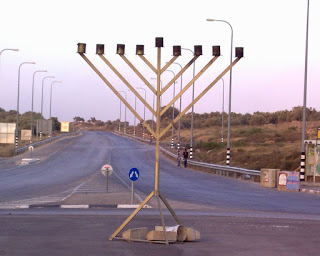 Anyone who knows anything about menorahs would instantly recognize this as one of the hundreds, if not thousands, of menorahs erected by the Chabad hasidic movement worldwide. Wanting to fulfill the Jewish mitzvah of “publicizing the miracle,” they erect huge menorahs all over the place.

Including checkpoints, so soldiers can enjoy them for eight days out of the year.

It is not a political statement. It is not meant to rub anyone’s nose in Judaism. It is meant to do a mitzvah, exactly the same as lighting a menorah in one’s house.

But when your entire concept of Judaism is so perverted as Anne Baltzer’s and that of the pro-BDS Jews, everything any Jew does in Israel is considered an affront to Palestinians.

They are the bigots.

Would they complain about how Muslims co-opt Jewish and Christian holy places? About how Muslims send their calls to prayer out at ear-splitting volume towards communities of non-Muslims?

Of course not. They are antisemites first, and they only pretend to care about people’s feelings when it is convenient to them.

And only people who deeply hate their own religion would think of a menorah as primarily a tool of oppression.