Thursday is the 100th anniversary of the Balfour Declaration, yet after 100 years people still argue over it and Abbas is still asking Great Britain for an apology.

The second question is no more settled than the first.

We all are familiar with the language of the declaration:


His Majesty’s government view with favour the establishment in Palestine of a national home for the Jewish people, and will use their best endeavours to facilitate the achievement of this object, it being clearly understood that nothing shall be done which may prejudice the civil and religious rights of existing non-Jewish communities in Palestine, or the rights and political status enjoyed by Jews in any other country.

But while the declaration seems to be talking about the future, in The Case For Israel, Alan Dershowitz writes that by the time the Balfour Declaration was published in 1917, that national home already existed:


Even before the Balfour Declaration of 1917, there was a de facto Jewish national home in Palestine consisting of several dozens of Jewish moshavim and kibbutzim in western and northeastern Palestine, as well as in Jewish cities such as Tel Aviv, Jerusalem, and Safad. The Jewish refugees in Palestine had established this homeland on the ground without the assistance of any colonial or imperialist powers. They had relied on their own hard work in building an infrastructure and cultivating land they had legally purchased.

This was an area under Ottoman control until the end of WWI. Even before WWI, there was no sovereign state, just a collection of districts under the control of foreign Ottoman control.

Dershowitz’s interpretation is not his own. In the British White Paper of 1922, Winston Churchill wrote about the Jewish National Home that had already been established in Palestine:


During the last two or three generations the Jews have recreated in Palestine a community, now numbering 80,000, of whom about one fourth are farmers or workers upon the land. This community has its own political organs; an elected assembly for the direction of its domestic concerns; elected councils in the towns; and an organization for the control of its schools. It has its elected Chief Rabbinate and Rabbinical Council for the direction of its religious affairs. Its business is conducted in Hebrew as a vernacular language, and a Hebrew Press serves its needs. It has its distinctive intellectual life and displays considerable economic activity. This community, then, with its town and country population, its political, religious, and social organizations, its own language, its own customs, its own life, has in fact “national” characteristics. When it is asked what is meant by the development of the Jewish National Home in Palestine, it may be answered that it is not the imposition of a Jewish nationality upon the inhabitants of Palestine as a whole, but the further development of the existing Jewish community, with the assistance of Jews in other parts of the world, in order that it may become a centre in which the Jewish people as a whole may take, on grounds of religion and race, an interest and a pride. But in order that this community should have the best prospect of free development and provide a full opportunity for the Jewish people to display its capacities, it is essential that it should know that it is in Palestine as of right and not on the sufferance. That is the reason why it is necessary that the existence of a Jewish National Home in Palestine should be internationally guaranteed, and that it should be formally recognized to rest upon ancient historic connection. [emphasis added]

The Balfour Declaration was not addressed to a foreign group, giving them permission to enter the land. On the contrary, it was recognition of what Jews — who have an indigenous connection to the land  — had already accomplished and would continue to develop.

As Dershowitz puts it:


The political and legal seeds were were thus sown for a two- (or three- ) state solution to the “Palestinian problem.” This was a perfect example of self-determination at work.

This is more than an abstract theory.

The 1925 Larousse French dictionary had an entry for “Palestine”: 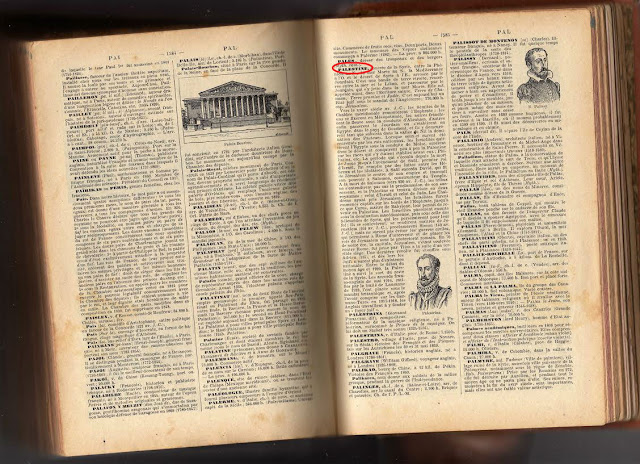 Here is a closeup view of the beginning of the entry: 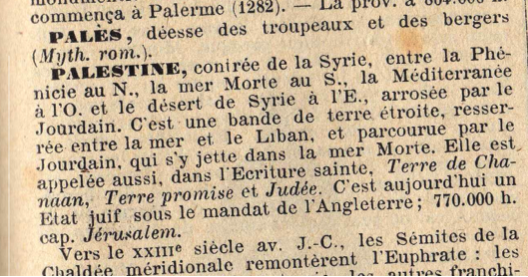 
PALESTINE, the land of Syria, between Phenicia in the North, the Dead Sea in the South, the Mediterranean in the West, and the Syrian Desert in the East, watered by the Jordan. It is a narrow strip of land, narrowed between the sea, Lebanon, and traversed by the Jordan, which throws itself into the Dead Sea. It is also called, in Scripture, Land of Chanaan, Promised Land and Judea . It is today [in 1925] a Jewish state under the mandate of England; 770,000 inhabitants. Jerusalem capital.

Already in 1925, before WWII and before the Israeli War of Independence, there was a recognition of a Jewish state called Palestine, a state of 770,000 inhabitants that included both Jews and Muslims. It’s capital was Jerusalem, which did not have that designation under Ottoman rule.

Not everyone may have recognized Palestine as such, certainly the Arabs did not, but the ideas expressed by Churchill were more than abstract and had gained a certain acceptance.


I am persuaded that the Allied nations, with the fullest concurrence of our own government and people, are agreed that in Palestine shall be laid the foundations of a Jewish commonwealth.

The culmination of that self-determination — with a state for the Arabs — was prevented by war and a refusal to accept even the presence of Jews on the land.

So, what were the Jews doing in Palestine before the Lord Balfour came out with his famous declaration? They were not waiting around to enter as invited guests. Instead, they worked on a land to which they have a 3,000 year history. Jews with indigenous roots to the land worked to re-establish it as a sovereign state, something it had never been since the time of the Romans.

Jews made a choice.
The Arabs made their own choice too.