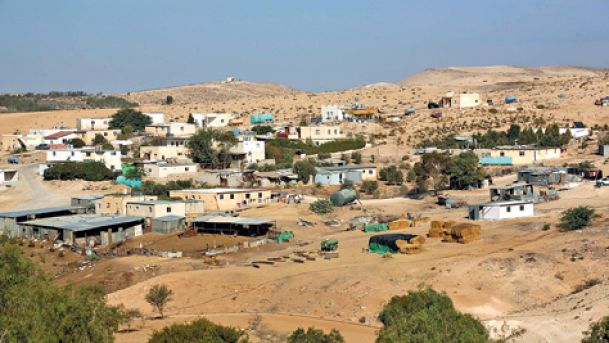 Here is Israel’s backgrounder on the Negev Hiran community – because the media won’t bother to report it.
Background on the Bedouin Localities of Hiran in Southern Israel
The Bedouins were a nomadic ethnic group from the Arabian Peninsula when they entered the Negev area in southern Israel during the 19th century. Over the past hundred years, the Bedouin community in Southern Israel gradually became semi-nomadic, and in the last few decades they have been living in permanent localities. Since the establishment of the State of Israel, Bedouins have formed an integral part of Israeli society.
Most of the Negev Bedouins live in planned, modern localities. A minority of Bedouins live in unrecognized locations and encampments, lacking basic infrastructure.
The status of several unrecognized Bedouin localities in the Negev is a complicated issue that has been the subject of legal proceedings for decades, and in the past few years, the government has made enormous efforts to find agreed-upon solutions that would benefit this population. The plans for the development of Bedouin villages and towns will provide the Bedouin population with basic infrastructures – including electricity, running water and sewage systems – that many currently lack, as well as access to modern education, health and employment opportunities.
The following is a short summary of the case of the unrecognized site of Hiran, which was the subject of a Supreme Court decision in May 2015.
1. Aerial Photographs:
Aerial photographs of the area show that a permanent Bedouin locality began in the area of Hiran in the mid-1980s. Before that time, there were merely a handful of structures there. Copies of these photographs, which were taken periodically (the first was taken in 1945 showing empty land), are available upon request. [I requested them, have not yet received them – EoZ)
2. Plan to settle the Bedouins of Hiran in a modern Bedouin town:
Approximately 200 persons currently reside in the unrecognized locality of Hiran, in poor conditions lacking basic infrastructure.
Israel’s Bedouin Development Authority has set aside approximately 140 plots, with an average area of 700 square meters (over 7,500 square feet) each, for the benefit of this Bedouin population, in the modern Bedouin town of Hura, which is 5 kilometers away from Hiran.
It should be noted that approximately 3,500 members of the same Bedouin tribe already live in Hura.
The location of Hiran is currently slated for the development of a new town for the general population.
3. Summary of the legal proceedings:
·         In April 2004, two claims were brought to an Israeli Magistrates’ Court regarding the relocation of the Bedouins from the area of Hiran, where a new town was being planned for members of Israel’s general population.
The Magistrates’ Court accepted the legal argument presented by representatives of the Israeli government. Accordingly, in July 2009, the Court ruled that the State of Israel had ownership rights over the land. At the same time, the Court determined that the claimants were “permitted residents” (and not “trespassers”), but that this permission could be cancelled depending on the circumstances.
·         During 2009, the claimants appealed to the District Court. In its ruling of February 2011, the District Court rejected the appeal and adopted the ruling of the Magistrates’ Court.
·         In 2011, the Bedouin claimants filed a motion to appeal the aforementioned rulings to Israel’s Supreme Court. In the Supreme Court ruling dated 5 May 2015, the appeal was rejected by a majority of the Supreme Court Justices who heard the case.
4. Short summary of the reasoning of the Supreme Court’s ruling (May 2015):
a.            The Supreme Court noted that the evidence demonstrates that, in the past, very few people lived in the Hiran area and that those who did lived in temporary shelters (tents).
Only in the last few years – as procedures for developing the new town moved forward – did more Bedouin families begin to live at the location in permanent housing, apparently in order to establish facts on the ground.
b.            The Israeli government gave the affected Bedouin families the chance to move to plots allocated for their use and that of their children in the town of Hura, and offered them financial compensation as well. The government gave them an additional alternative: to live in the town that is planned for Hiran, which is designated for the general population (as long as they meet the conditions set for allthose applying to live there).
The Court added that in light of the history of the issue, it was appropriate to consider granting special dispensations in the public tender and other conditions for purchasing a plot in the planned town to anyone belonging to the core of Bedouins who were the earliest settlers in the area.
5. Following the rejection of the appeal by the Supreme Court, since May 2015, the relevant Israeli authorities have initiated proceedings to develop a living area for the relevant population and to implement the approved plans.