For the several years, the Polish government has been trying to minimize the role of Poles in the Holocaust, as Times of Israel reported last January:

The Polish government marked International Holocaust Remembrance Day on Sunday, but completely ignored the complicity of Poles who actively participated in crimes against Jews during World War II.

Rather, Warsaw seemed to stress Polish suffering and Polish efforts to rescue Jews, leading an Israeli Holocaust historian to charge that Poland is trying to make the Nazi genocide look like a “Polish rescue project.”
Historians debate how many Poles aided the Nazi death machine during World War II, with estimates ranging from tens of thousands to hundreds of thousands.

Get The Times of Israel’s Daily Edition by email and never miss our top storiesFREE SIGN UP
But Poland has never admitted to complicity on any large scale and last year Warsaw passed a law prohibiting people from blaming the Polish nation for Holocaust atrocities.

Indeed, a new study on Holocaust remembrance in Europe argues that the Poles are among the “worst offenders” when it comes to efforts to rehabilitate Nazi collaborators and war criminals and “minimizing their own guilt in the attempted extermination of Jews.”

According to the study, conducted by researchers from Yale and Grinnell colleges and published last week, the right-wing government in Warsaw has “engaged in competitive victimization, emphasising the experience of Polish victims over that of Jewish victims.

“The government spends considerable effort on rewriting history rather than acknowledging and learning from it,” the study found.

The Auschwitz Museum Twitter account appears to be part of the Polish whitewashing of their people’s complicity in the Holocaust.

The account has a lot of very good information. It humanizes many victims of the Holocaust. It has gone on a massive campaign to recruit followers, and is nearing its goal of one million.

But the Auschwitz Museum account minimizes Polish complicity in the Holocaust just as the Polish government does. This thread from Sunday illuminates this, as the Museum posted this: 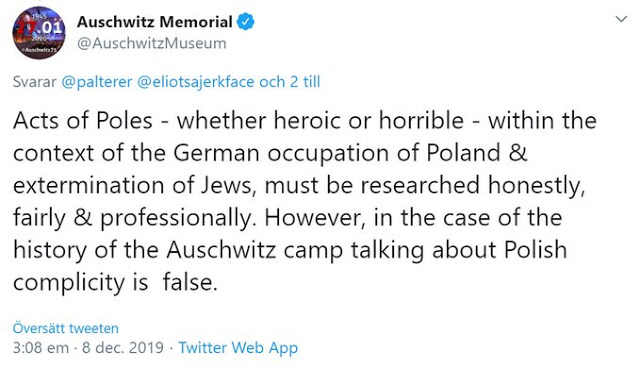 So, the beginning is about actions of Poles during German occupation of Poland in WW2. It
mentions these actions (acts) “must be researched honestly fairly & professionally” “within the context of the German occupation…and extermination of Jews” if they were “heroic or horrible”

That whether the acts of Poles relating to the Holocaust and under German occupation were heroic or horrible.

So far we´re talking about what the Poles did in relation to the extermination of Jews.
What is revealing is the phrase “heroic or horrible”.
It implies direct actions with good or bad consequences
It is clear that you are talking about the acts of individuals that affected Jews in direct relations. Man to man. What one did directly to another.

The 2nd part.
“However, in the case of the history of the Auschwitz camp talking about Polish complicity is false”.

We´ve already established that the 1st part is about ones behaviour towards another in direct relation. It can not be about anything else based on the wording.

This is false.
As far as I agree that research of the Holocaust should be continued there´s no need for further research on Polish complicity. We have so much knowledge about that from eyewitnesses, documentation, news, articles and so on that we know that history isn´t going to change.
Poles were complicit in the Holocaust. And Poles were often the reason Jews ended up in Auschwitz.

That is the “shit” you need to own.

There´s one thing that determines your actions. And 1 thing only.

How you act, or react, to circumstances is solely based on who you are.

Blaming others for your own behaviour is immature.

So let me tell you what we see in your tweet.

“If the Polish ppl did good or bad to the Jews, if it was bad it was because of the German occupation – it´s their fault, needs to be researched. But Poles had nothing to do with Auschwitz”.

Does this sound like a true description of the events to anyone?

This Polish historian estimates that some 200,000 Jews were killed by Poles betraying them, sometimes after extorting all their possessions.

That is part of the history that the official Auschwitz Museum account doesn’t want you to know about.