The Israel-haters, a category that we must now add Peter Beinart to, use the argument that the imperative of Palestinian human rights demands a one-state solution with a natural Arab majority and Jewish minority.

The issue isn’t human rights. Everyone supports human rights. The issue is how to balance competing human rights of two different groups.  But the Israel haters don’t want you to think about that problem – they want to emphasize the Palestinian human rights issue and they do everything possible to avoid the obvious fact that Jews would not do well under any Arab majority government. They also avoid the equally obvious fact that Palestinians under “occupation” are in far better shape than Jews would be under Arab rule.

Why is this obvious? Just look at how Christians are doing in the Arab world.  They are oppressed and fleeing as fast as they can.

Arab Muslims hate Jews much more than they hate Christians.

Sometimes, though, the one-stater Israel-haters are forced to answer the question about Jewish human rights directly. And their response is simply, yeah, that might be a problem, but we hope it won’t be that bad, and anyway it is a small price to pay for their vision of a world without Israel.

Listen to Ali Abunimah, whose book on a single state inspired Beinart, answer this very question in 2009 at Hampshire College:

You can never have an absolute guarantee about what the future will be like. … You cannot guarantee that if there was a one-state solution it wouldn’t, it would be…the best scenario is if it’s more in the direction of South Africa and Northern Ireland than Zimbabwe. But we couldn’t rule out, you know, some disastrous situation, like Zimbabwe.

Beinart, when asked that same question, is even less honest than Abuinimah. He didn’t even admit to the possibility of pogroms against Jews as the Arab world has had for centuries:

If there’s another round of violence between these two populations, why does that presage a situation in which they can live peacefully?

The evidence suggests that once people gain their freedom, the appeal of violence goes way down. The Irish Republican Army killed more than 1,700 people in terrorist attacks both in Northern Ireland and in the rest of Britain. That didn’t mean that Catholics in Northern Ireland were incapable of living alongside Protestants. It meant that they needed to live alongside Protestants with equal rights.

See? if Arabs are attacking Jews, that is proof that the Jews are mistreating Arabs!

Because Arab antisemitism is unthinkable.

Beinart doubles down on the same idea here: 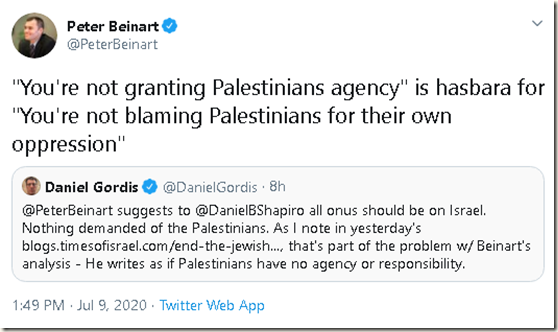 To human rights posers like Beinart, Arabs cannot be expected to act morally when they are “oppressed.” This is exactly what Hamas and Islamic Jihad have been saying for years after every terror attack: it is a “natural reaction” to Israel’s oppression.

To them, Jews can only be moral by voluntarily putting their lives in the hands of those who have made it clear that they want the entire land to be free of Jews.

And one definition of antisemitism is treating Israel with double standards.

In the real world, one tries to balance the competing rights of different people. Whether Peter likes it or not, there is only one Jewish state, and eliminating it is far more immoral than maintaining it while trying to minimize any human rights problems that result.  I’m sure Israel can do better, and it should. But destroying Israel would destroy the human rights of Jews – and it would degrade the human rights of nearly two million Israeli Arabs as well.