For the first time in years, Jews went up onto the Temple Mount on Monday without the accompaniment of Muslim religious authority officials, as police allowed non-Muslim visitors back onto the powder-keg holy site for the first time since a Friday terror attack in the Old City of Jerusalem.

Many members of the Waqf — the Islamic trust that administers the site — have objected to the metal detectors Israel installed at entrances to the holy site and have refused to ascend to the compound, urging other Muslims to stay away as well in protest.

Waqf officials normally keep a close eye on non-Muslim visitors to the site, where a delicate status quo allowing only Muslim prayer is in place.

A Twitter feed belonging to Israeli rescue service Hatzolah published a picture of what it said were a group of Jews taking advantage of the lack of Waqf officials and reciting Kaddish for the two police officers — both Druze — who were killed in the attack. 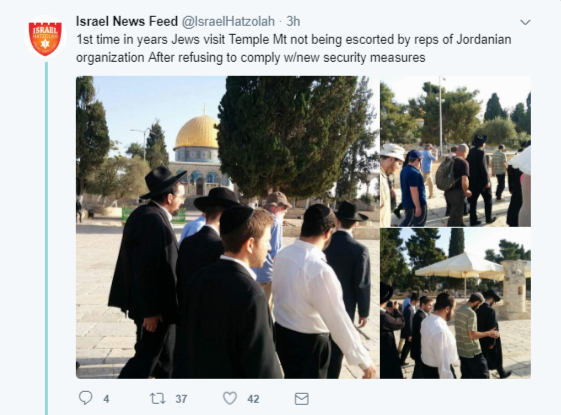 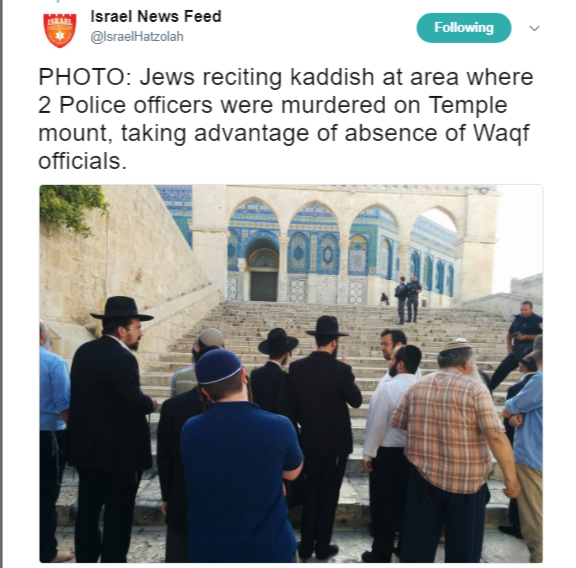 So “Jewish extremists” “stormed” the “Al Aqsa mosque” and prayed for the souls of Arabs. and the only reason why the Muslims who normally zealously stop such actions didn’t is because they choose to boycott their “third holiest site” because they object to metal detectors being set up outside, which would stop them from bringing in weapons to their “holy site.”

Arab media is upset at Jews praying on the Temple Mount (they of course don’t report the Kaddish part, only the “Jewish rituals”) but they cannot call for the Waqf to enter the defiled area and accept the security measures.

Which means, I imagine, that the Arabs will go to the UN any moment now.