Last month, I reported that Hamas was going to release a new manifesto that would not replace its antisemitic charter, but which would use more moderate language without changing Hamas’ positions one bit.

I predicted that the media would be fooled by this and would report this document as if it is proof of a new, moderate Hamas.

I must say that I was pleasantly surprised by the accurate analysis of AP’s Fares Akram of the new document:

The Islamic militant group Hamas has drafted a new political program it hopes will improve ties with neighboring Egypt and the West, and present a more moderate image that will help it get off Western terrorism lists.

The internationally isolated group, which has ruled the Gaza Strip for the past decade, characterizes itself in the manifesto as a Palestinian resistance movement against Israeli occupation, dropping references to holy war against Jews. It also raises the possibility of a Palestinian state in the West Bank, Gaza Strip and east Jerusalem, lands Israel captured in the 1967 Middle East war.

The document plays down ties to Hamas’ parent movement, the regional Muslim Brotherhood, which is being targeted by Egypt’s government as a terror organization.

However, Hamas appears to have stopped short of a significant ideological shift amid concerns about alienating its hard-line base at a time when ultra-fundamentalist Islamist groups, such as the Salafists, are making inroads, particularly in Gaza.

The new program, to be made public at the end of the month, will not formally replace Hamas’ 1988 founding covenant, which called for the destruction of Israel and for “confronting the usurpation of Palestine by the Jews through jihad.” 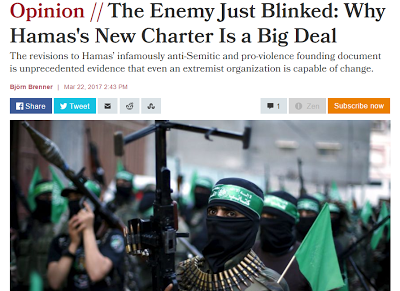 But Haaretz found an idiotic “expert” named Björn Brenner, who has actually written books on Hamas, who completely believes that the new manifesto replaces the charter, and therefore this proves that Hamas has moderated.


Thirty years after it was founded, Hamas is replacing its anti-Semitic and violent charter with a comprehensively revised document modifying several of its extreme and rejectionist positions. While several of these strategic changes are not completely new – they have at times been talked about by Hamas leaders, but later retracted or contradicted – expressly including them in its charter constitutes something quite unprecedented.

Brenner is wrong. Nothing changed except the tone. The charter is not being replaced. Senior Hamas leader Salah al Bardawil said explicitly “This new document of the Hamas organization will never be considered to constitute an alternative to  the organization’s founding charter.”

Hamas has never – not once – contradicted what is written in the charter. When it says it will accept a Palestinian state in the territories, that doesn’t mean it accepts Israel in any borders, only that the destruction of Israel will take place in phases. We’ve seen gullible Westerners swallow Hamas’ implications of moderation many times before, but every single time, if you read their words carefully, you will see that their positions have not changed at all, only their emphasis.

The funny thing is that in 2013, “moderate” Hamas political leader Khaled Meshal released a document that seems very similar to what is being discussed now. It was a nineteen point position paper that I translated then. It allowed for non-violent resistance and it claimed that Hamas was not against Jews, just like the upcoming manifesto. Here are the first ten points:

1. Palestine from the river to the sea, and from north to south, is a land of the Palestinian people and its homeland and its legitimate right, we may not a waiver an inch or any part thereof, no matter what the reasons and circumstances and pressures.

2. Palestine – all of Palestine – is a land of Islamic and Arab affiliation, a blessed sacred land, that has a major portion in the heart of every Arab and Muslim

4. Liberation of Palestine is a national duty; it is the responsibility of the Palestinian people and the Arab and Islamic nation, it is also a humanitarian responsibility in accordance with the requirements of truth and justice.

5. Jihad and the armed resistance is the right and real method for the liberation of Palestine, and the restoration of all the rights, together with, of course, all forms of political and diplomatic struggle including in the media, public and legal [spheres]; with the need to mobilize all the energies of the nation in the battle

6. Resistance is a means and not an end, if we have another way without blood and painful sacrifices to liberate the land and ending the occupation and the restoration of rights we would take it, but history proves that there is no option to expel the occupiers and restore the land and rights without using all forms of resistance, led by armed resistance.

7. We are not fighting Jews because they are Jews, but are fighting the Zionist Jews occupiers, the aggressors, and we will fight anyone who tries to attack us or usurp our rights or occupy our land, regardless of religion or affiliation, race or nationality.

8. The Zionist project is a racist project based on murder and terrorism, and so it is the enemy of the Palestinian people and the nation, and is a real threat to them, and a huge threat to its security and interests, and it is not an exaggeration to say that it is a danger to the security of the humanitarian community and the interests and stability.

9. Jerusalem is an Islamic and Christian [holy place], we many not give it up nor relinquish any part of it, it is our right and our spirit, our history, our present and our future, which is the capital of Palestine, and dearest to the hearts of Arabs and Muslims…. Israel has no legitimacy and no right to to Jerusalem at all, nor any legitimacy nor right to all of Palestine. And all actions of Israel in Jerusalem to Judaize and settle and falsification of facts and attempts to fabricate history are void.

10. Upholding the right of return of Palestinian refugees and displaced persons to their homes from which they were expelled, or were prevented from returning, both in the occupied territories in 1948 or 1967, to all of Palestine; we refuse to compromise in any way for this right. At the same time reject all settlement projects or alternative homelands…. [some detail on how people proposed Lebanon or Jordan or the Sinai as alternate homelands]

Of course, these same experts are keen on pretending that their tortured reading of potential new Hamas papers is more reflective of reality than explicit genocidal statements by Hamas leaders, today.

Be on the lookout for the other willfully blind “experts” and reporters who will dutifully pretend that this new document replaces Hamas’genocidal charter. In the next two weeks there will be plenty of them.