Can We Eat Bacon Now? Leviticus Was Written for Priests, Not You, Say Scholars

The Book of Leviticus, the third book in the Old Testament, is considered something of an anomaly by some scholars.

The rest of the Old Testament books are concerned with the history of the Jewish people and their belief. But Leviticus concerns itself with ritual, legal, and moral practices. It lays down the laws by which the Jewish people are supposed to live.

But, was it truly meant for the laity? Should all Jews have to adhere to its tenets, as is commonly assumed? Some Biblical scholars argue that the Book of Leviticus was not originally meant to apply to the general public: its laws were meant for the priests of the Temple.

Dr. Robert Gnuse, professor in the Religious Studies Department at Loyola University, says that historically, the rules on food and clothing found in the Book of Leviticus were meant exclusively for priests, just like the laws in the Hindu Code of Manu Smriti for Brahmin priests.

That is, until the period of the Babylonian captivity. Someone from the priestly class in Babylon found a way to encourage the Jewish people living in exile to take on these laws in order to keep them together as a community, Gnuse theorizes. This is also the view Mary Douglas took in her earlier works.

First of all, the text of Leviticus makes it clear which rules are for all Israelites and which only for priests.

Some sections start with variants of And the LORD called unto Moses, and spoke unto him out of the tent of meeting, saying, Speak unto the children of Israel, and say unto them:

Others start with And the LORD spoke unto Moses, saying: Command Aaron and his sons, saying:

Beyond that, the laws of Kosher are also in Deuteronomy, where the entire book was clearly meant for the entire nation. (A little of the kosher laws are in Exodus, too, and at least one mentioned in Genesis.)

So how much is this are idiotic Biblical scholars and how much Haaretz twisting their words for the story?

I want to stress that I have respect for some non-Jewish Biblical scholars. Like George Bush. No, not that one, but a relative who wrote books about the Bible in the 19th century. Here is the first page of his commentary on Leviticus 11, the chapter that speaks about kosher laws: 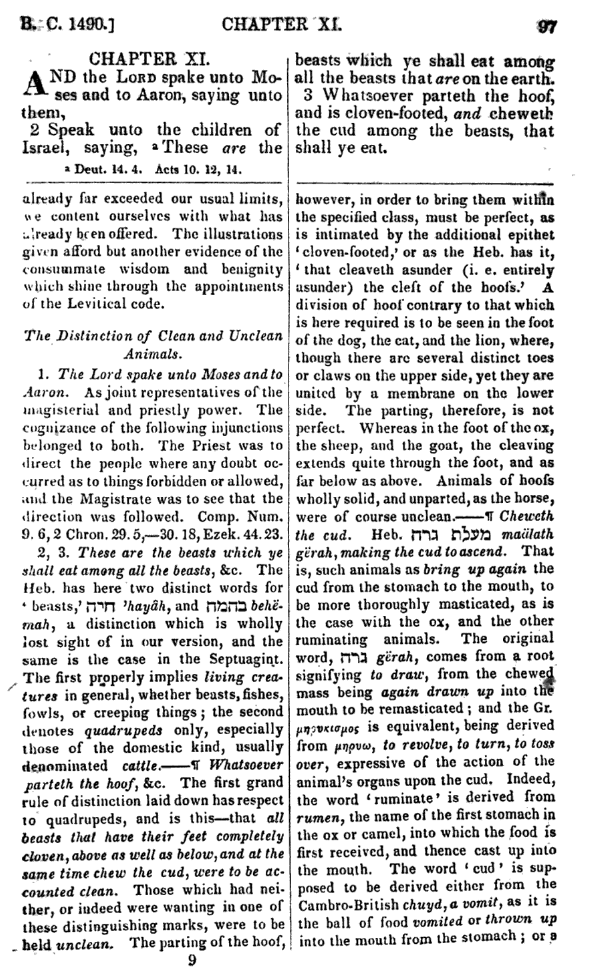