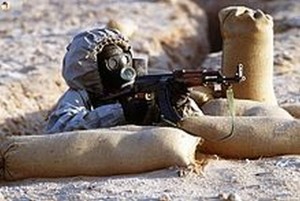 Damascus, April 5 – Scientists digging in the outskirts of the Syrian capital have discovered fragments of what appear to be one of former US President Barack Obama’s “red lines” warning Basher Assad not to use chemical weapons, the excavation leaders reported today.
A team of archaeologists exploring historical features of Syria came upon the pieces of red line, and, based on contextual and chemical indicators, pinpointed the date of the fragments at the latter half of 2014 CE, during Obama’s second term. They also utilized analytical tools that gave them what they described as near-certainty” that the original red lines, of which there must have been at least three, came from Obama himself.
“We’re confident we have identified the origin of these red line fragments, and have determined that their purpose was a series of ultimatums from President Obama to President Assad, to the effect that deployment of chemical or biological weapons by Syrian regime forces would prompt an immediate and severe US military reaction,” explained team leader Linie Roth of the University of Munich.
What remains unclear, noted Roth, is whether the fragments the team has collected and identified all come from a single red line or from several. “When Assad crossed Obama’s red lines, it’s not completely certain what happened to those lines. Contemporary records indicate that the lines still existed after having been crossed, but the record runs dry by the end of 2014, and the only mentions of red lines are in reference to lines that once existed, presumably these three. We need to examine these specimens closely, and perhaps continue digging to shed light on what became of Obama’s red lines on Syrian chemical weapons.”
Compounding the difficulty is the Obama administration’s own subsequent attempts to conceal or otherwise reduce the identifiability of the red lines it had established. “Unconfirmed accounts from the period place administration personnel in the vicinity of the red lines with deflection, concealment, and denial tools, and the vague picture we have at the moment is consistent with efforts to fudge the record, so we are still cautious,” added Roth. “Non-echo-chamber sources are of course held as less credible than those who towed the presidential line, a fact that poses challenges to gaining a coherent picture.”
Obama’s red lines in Syria are only a fraction of the red lines the previous president laid down, according to scholars. “Accounts from the time of Obama discuss various ultimatums regarding Ukraine, Iran, and something called ‘ISIL,'” observed John Kerry, a former US Senator. “None of those red lines, when violated, appear to have triggered anything. I’m at a loss to explain it.”