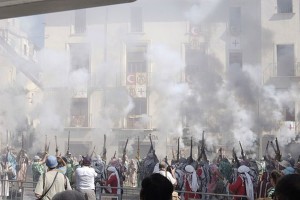 Jerusalem, December 6 – Arab threats of violence in response to possible American recognition of this city as Israel’s capital has Arab leaders voicing resentment that Western media portray them as violent, local sources reported Wednesday.
Specific legal details remain unresolved, but US President Donald Trump declined to sign the six-month waiver to postpone the move of US Embassy from Tel Aviv to Jerusalem as per a 1995 law, leading to speculation that the administration will recognize Israel’s claim to the holy city as its capital. Whereas most countries refuse to acknowledge Israel’s claim and all foreign embassies are currently in Tel Aviv, the prospect of American recognition of Israel’s connection to Jerusalem has Arab leaders in the region and beyond threatening an explosion of violence and the effective end of any American-brokered  peace effort between Palestinians and Israel. At the same time, the leaders take offense that they are depicted in Western media and politics as violent and given to threats of violence merely because they threaten or commit violence in response to developments they dislike.
“If the US recognizes Israel’s claims to Jerusalem that will mean the end of an honest role for the US in negotiations,” declared Palestinian official Saeb Erekat. “The Arab street will not tolerate such an affront to its honor once the signal is given from Arab governments to riot and to target American facilities or interests in the region. One-sided acceptance of Israeli claims and policies is an affront to Arab honor, as is the expectation that Arabs resort to violence or the threat thereof as a political or diplomatic tool. What a horrible bit of prejudice.”
“Western media, adopting a lazy posture, assumes that Arabs are characterized by the tendencies the media notices,” lamented commentator Reza Aslan. “It just oozes bias. How do you get from the default Arab reaction to setbacks being violence – as in the response to those Danish cartoons of Muhammad; the Second Intifada; ongoing Palestinian violence; Syria; Iraq; Yemen; Lebanon; Egypt – to the idea that you can only expect Arabs to react with violence when they don’t get their way?”
Arab officials warned not to underestimate the violence that will erupt if the stereotyping continues. “We have our red lines,” admonished Sheikh Raed Salah of the Islamic Movement, Northern Faction. “One of those is negative portrayals of Arabs or Muslims. We will go to the greatest lengths to protect our collective honor, even violent lengths if necessary, to defend our people from being characterized as predisposed to violence.”