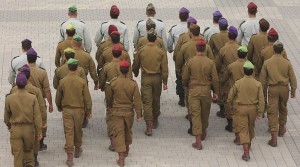 Tel Aviv, January 9 – Senior officers from Iraq, Egypt. Jordan, Bahrain, the United Arab Emirates, and Saudi Arabia who gathered for a conference at Israel’s Ministry of Defense this week issued fierce rebuttals of reports by media in their home countries that they are engaged in “normalization” with the Zionist enemy.
Attendees at a gathering of generals and colonels from several Persian Gulf states and other players in the global fight against Islamic terrorism who convened to discuss the latest developments and strategies with Israeli defense officials berated journalists for suggesting that any contacts with the hated Jews were taking place. An aide to General Ghass Layt of the Royal Bahrain Armed Forces interrupted a session with IDF Chief of Staff Lieutenant General Gadi Eizenkot and Mossad chief Yossi Cohen to admonish reporters not to engage in what he termed outrageous, libelous, and irresponsible rumor-mongering.
“This dangerous slander must stop,” declared Major Huday Utrust. “Our political. military, and diplomatic leadership has been trying for decades to address the threat of extremism, at times in consultation and cooperation with experts from every relevant country, and these false reports have the potential to inflame emotions and lead to disaster. General Layt was just stressing to Mr. Cohen how important it is that they continue not to maintain contacts to collaborate in opposing the Islamic State and Iran. My colleagues from the other Arab nations represented here will all agree.”
Egyptian General Yuwar Aful seconded the major’s remarks. “Journalists have a responsibility to exercise judgment, not just to spread reports they hear,” he warned. “Freedom of the press, if it were practiced in Arab countries, would not include the freedom to endanger the public safety. General Eizenkot just gave us a presentation on the importance of managing the media in that regard, and I must emphasize my agreement with his assessment that these stories of us conferring with and thus normalizing contacts with Israeli officials are harmful, hurtful, and incorrect.”
The officers indicated that regular, routine meetings of this nature will occur until the threat of such malicious reports is stamped out. “The spread of misinformation can be as damaging as the spread of disease,” observed IDF Deputy Chief of Staff Major General Yair Golan. “We need the cooperation of all the region’s major players to contain the threat and eliminate it. Israel stands ready to assist its neighbors where necessary in the fight against open normalization with Israel.”