The American Jewish Yearbook has interesting information about Jews throughout the world since its inception.

DECEMBER 3. One hundred and fifty Jewish emigrants from Yemen arrive in Palestine; they are distributed among colonies of Rehoboth and Rishon le-Zion.

September (1910): Jews of Yemen protest against refusal to accept their testimony in courts.

1913-14: JEWS OF THE YEMEN:—AUGUST. Government permits organization of judicial tribunals exclusively of Arabs; this action victimizes Jews who may be falsely accused, as testimony of two Arab witnesses suffices to secure condemnation.—Jew ill-treated and left half dead in roadway because he submitted successful bid when invited to exchange large sum of money for Government. Complaint of Jew unavailing.—Heads of community imprisoned for disobeying edict ordering them to clean streets, no matter what their social status. Representations to Governor of Sanaa, the representative of central Government, unavailing.— Minister of Interior declares that peremptory orders will be given to Military Governor of Sanaa to protect Jews of Yemen.— OCTOBER. Further cruelties of the Imam, spiritual head of Yemen, toward Jews reported. Jews denounced for alleged trading in intoxicating drinks promptly punished without investigation of the charges.—MARCH. The Imam accedes to request of Haham Bashi, that Alliance Israelite Universelle be permitted to establish a school at Sanaa in which Arabic, Hebrew, and a foreign language may be taught.—MAY 28. Haham Bashi receives reports from Sanaa that the Arabs have again attacked Jewish inhabitants. 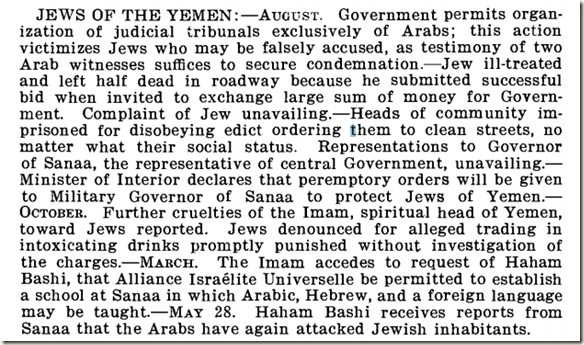 This is how Arabs have treated Jews throughout the centuries. Nothing to do with Zionism.