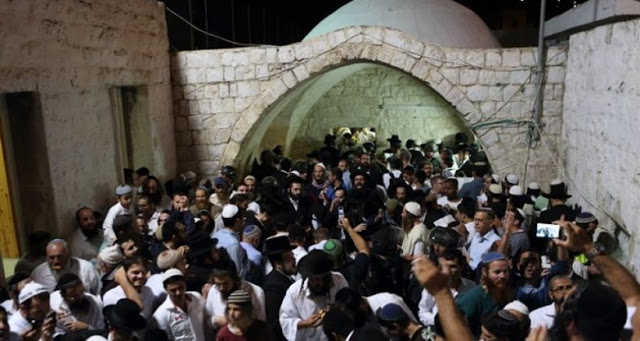 Every month or so, religious Jews flock to Joseph’s Tomb in Nablus to pray. They do this in the middle of the night, under heavy Israeli police protection, because otherwise they would be lynched.

Under existing agreements, the PA is supposed to allow access to holy sites under its control. The Interim Agreement says,  ‘Both sides shall respect and protect the religious rights of Jews, Christians, Muslims and Samaritans concerning the protection and free access to the holy sites as well as freedom of worship and practice.’

Here is how the PA’s official Wafa news agency describes the latest pilgrimage by religious Jews, who are willing to stay for hours in a virtual prison where walking outside could get them killed, in order to get a chance to pray at Joseph’s Tomb:

NABLUS, August 7, 2017 (WAFA) – At least two Palestinians were injured by rubber-coated metal bullets during clashes that erupted in Nablus in the northern West Bank early Monday after hundreds of Jewish settlers flocked to Joseph’s Tomb on the outskirts of the city.

In Arabic, the Jews were said to have “stormed” and “broken in” to the site.

According to Palestinians, Jews who want to pray at a holy site are provocative settlers. Their very existence “prompts clashes.”

The PA is against freedom of religion to Jews. If it wasn’t for the IDF, Jews would be banned from visiting the site altogether.

The way they treat Joseph’s Tomb is how they would treat any other important Jewish site that they insist should be under their control, which happens to include every single major Jewish historical and religious site.

Anyone who thinks that there can be peace with the Palestinians needs to explain exactly how these tolerant, peaceful people would treat the Jews who want to pray at Jewish holy sites. And feel free to bring examples from the tolerance of the Muslims when they controlled those sites under Ottoman and Jordanian rule, as well as how the PA treats Joseph’s Tomb today.