Dozens of Israeli settlers stormed the area of ​​Bab Al-Zawiya and Beersheba Street in the center of Hebron. According to witnesses, large numbers of settlers stormed the center of Hebron through the military roadblock at the entrance to the Martyrs Street towards Beersheba Street , under the protection of the occupation army, which closed the area.
They pointed out that the Israeli army prevented citizens from moving to ensure the access of settlers to the so-called “Hebron” tomb, where they performed Talmudic prayers.

The so called Christian Peacemaker Teams reported on this too:

The border police barricaded the area with armored vehicles while a group of settlers from the illegal outposts within al-Khalil, some of them carrying automatic weapons, exited the checkpoint and walked to a destination within the Palestinian administered part of the city. 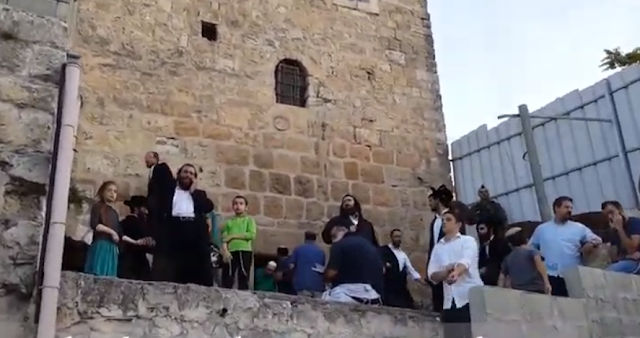 A couple of times a year, a large group of chasidim, in this case Breslovers, go to visit the grave of  Biblical figure Othniel Ben Kenaz, the first of the Judges. His grave happens to be in the H1 area of Hebron that is normally Judenrein. Under previous agreements, Jews should have free access to holy spots.

The IDF coordinates these visits with the Palestinian Authority ahead of time. These aren’t surprises, they aren’t spontaneous incursions into Area A. The only reason the IDF must be there is because otherwise the defenseless Jews would be ripped apart.

To say that these chasidim are heavily armed is laughable. It goes to show that Christian Peacemaking Teams are not interested in peace and very interested in destroying any Jewish rights in the Middle East. (And for a Christian to refer to Biblical Hebron as “Al-Khalil” shows that they are not very  Christian, either.)