Miftah, the NGO founded by Hanan Ashrawi and that is in the news for both is historic antisemitism and its offer to sponsor the Ilhan Omar/Rashida Tlaib aborted visit to “Palestine,” still has many offensive and ahistorical articles on its site from over the years.

By what historical stranglehold do the Jews demand our complete submission to their unapologetic brutality to their Arab neighbors? From 1948 until the present year 2001—for half a century—they have chanted, like some mesmerized tribe in a jungle, the magic mantra of Security. Security from what? Yasser Arafat no longer has an army. He has no air force. No tanks. He is not bulldozing Israeli houses or invading neighborhoods with armed troops or firing from helicopter gunships. He has a desperate people who have produced suicide bombers, young men driven almost mad by the despair of living in a bottle like those drugged roaches—which is what the West Bank and Gaza have become.

The entire article is vile and filled with bizarre conspiracy theories, which is perhaps fitting, because the author had President Zachary Taylor exhumed to prove her theory that he was assissinated with poison. (Experts found no such evidence.)

Rising includes  number of debunked Zionist quotes, but I found this one interesting:


According to the Zionist agenda, Palestine would be just the first step toward a “Greater Israel,” which would ultimately include Lebanon, Jordan, Syria and even Iraq. If this sounds preposterous, one need only go back to the beginning, in 1948, when the first prime minister of Israel, Ben-Gurion, addressed his General Staff. Confident—largely because of American money which had secured Israel’s military superiority—Ben-Gurion told them: “We should prepare to go over to the offensive with the aim of smashing Lebanon, Transjordan and Syria….When we…bomb Amman, we will eliminate Transjordan too, and then Syria will fall. If Egypt still dares to fight on, we shall bomb Port Said, Alexandria, and Cairo.”

The entire paragraph is insane – remember, this is written after Israel had given up the Sinai to Egypt and much of the West Bank to the PLO – but who can even consider that Ben Gurion had designs on the entire Levant in 1948?

The quote comes from Noam Chomsky, in his 1983 book The Fateful Triangle, republished and updated a number of times since then: 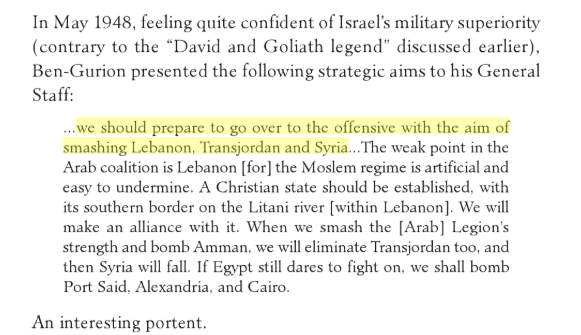 Although the Chomsky book includes hundreds of footnotes, it provides none for this quote.

Every other place on the Internet that quotes this refers to Chomsky, not to any primary source.

It appears to have been a complete fabrication.

Which makes it perfect for an antisemitic professor to publish in the antisemitic Miftah.