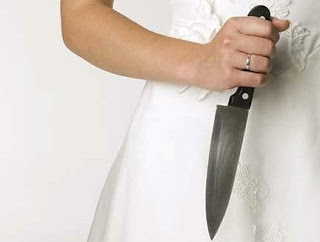 Arabic media has been reporting this story that’s good enough make you forget all about other news:

A housewife in Alexandria, Egypt, took revenge on her husband by cutting off his penis and leaving him bleeding, after seeing messages on his private phone confirming his betrayal and his many female relationships.

The Egyptian security forces received a notification from a hospital that a government worker was suffering from severe bleeding due to the cutting of his penis.

Investigations revealed that his 23-year-old wife drugged him, and after making sure he lost consciousness, his penis was cut off with a kitchen knife.

The accused was arrested, and she confessed to the crime, and she did this to her husband in retaliation for his multiple episodes of adultery.

In her confession, she said that she was suspicious of his behavior for returning late every day, texting more than one conversation on his private phone. She confronted him and he and he promised his commitment to her.

After a while, she discovered that he was in a relationship with one of the women, so she decided to take revenge on him. To be 100% certain, she decided to drug him so that she could open his phone and confirm the text messages. She put narcotics in his tea, and after making sure he was asleep, she opened his phone and saw texts about his promise to marry the woman.

That’s when she took out the kitchen knife and took things into her own hands.

Unlike John Bobbitt, it does not appear that the husband was reattached with his member.