Thomas is accused of using a machete to attack Jews attending a Chanukah party at the home of Rabbi Rottenburg in the Forshay neighborhood of Monsey on Dec. 28.

According to Attorney Michael Sussman, “Mr. Thomas was not competent to stand trial” following an evaluation by Dr. Andrew Levin, who has asked a federal judge to hold what he termed a competency evaluation.

Apparently, Thomas’s attack, which injured 6 Jews and put a man in the hospital in a coma with a fractured skull, was not done out of hate — contrary to his Google search for “Zionist temples” — but because he neglected to take his meds.


“He has no history of like violent acts and no convictions for any crime,” Sussman has said in a statement. “He has no known history of anti-Semitism and was raised in a home which embraced and respected all religions and races. He is not a member of any hate groups.”

In other words, his lawyer is also arguing for leniency on the basis of this being Thomas’s first offense.

The lawyer also wants Levin’s report and all related documents sealed in order to protect his client’s privacy.

Sussman has not yet offered any suggestions on how to protect Jews from his client in the future should he get off without having to go to prison.

Blaming antisemitic attacks on mental illness may sound familiar — it is all the rage in France, where there have been multiple cases of denying the Jew-hatred behind attacks on Jews:


o In 2003, Sebastian Selam, was stabbed to death by a Muslim who said afterward: “Mother, I’m going to heaven. I killed a Jew!” The murderer, Adel Amastaibou, was found unfit to stand trial — even though he had no previous history of mental illness.

o In 2015, a Muslim man, Farid Haddouche, was deemed unfit initially to stand trial for his stabbing attack of Jews in Marseille — because of mental issues. He shouted about Allah during the attack. He had no history of mental illness. After protests by Jewish groups, Haddouche was sentenced to four years in jail.

o Sarah Halimi, a Jewish physician, was murdered in Paris in 2017 by Kobili Traore, a Muslim. A review by an independent panel of psychiatrists determined that Traore was generally mentally competent, but because not on the night of the murder, because he consumed cannabis. The judge in the case went so far as to order a third psychiatric examination — independent of the defense attorney. More recently, in February 2018, the investigator finally admitted in writing that the attack was antisemitic. But by May 2019, Traore was still being considered unfit for trial.

But there is also a second excuse being used for denying the antisemitism behind attacks on Jews, though it is not as widely used. Yet.

From 2 years ago: German court rules that firebombing a synagogue is not anti-Semitic


This week a German regional court ruled that the 2014 firebombing of a synagogue in Wuppertal, a region just east of Düsseldorf, was an act of criminal arson, but not anti-Semitic. Instead, the court found it was a protest against Israel, even though the synagogue was obviously not in Israel and those who worship there are Jews, not Israelis. [emphasis added]

The decision upheld that of a lower court, which stated the perpetrators, a trio of Palestinian-born German residents, wanted to “call attention to the Gaza conflict” when they prepared and then lobbed Molotov cocktails at the synagogue one July night in 2014. No one was injured, but the attack caused €800 in damages. The men were ultimately given suspended sentences.

But this is not the first time that antisemitism has been excused on the basis of political protest.

NZZ Online, a Swiss publication, recounts the situation Jews faced in Switzerland when the Nazis came to power [translated with Google Translate]:


After the National Socialists took power in 1933 and when the newly emerging Swiss front movement became more and more aggressive, the pressure on the Swiss Jews and the Jewish refugees living here increased. Through brochures and pamphlets, racist anti-Semitism, which had already incorporated traditional religious anti-Judaism at the end of the 19th century, reached ever broader sections of the population. The Swiss Association of Israeli Municipalities (SIG), which saw itself as a representative of Swiss Jewry, had to act: under the motto “Defense and Enlightenment”, it tried to avert the increasing threat with legal and journalistic actions and to defend the principles of the rule of law and equal rights.

That “legal and journalistic” defense by Jews sounds similar to what we are attempting today — just substitute “social media” for journalism.

The problem was the fear that being too aggressive would further fuel antisemitism. Besides, there was no legal tool specifically for combatting the distribution of antisemitic publications. But when the “National Front” distributed the “Protocols of the Elders of Zion” at a rally in 1933, SIG filed a criminal complaint with the Israelite cultural community in Bern for violating a Bernese statute prohibiting the distribution of “immoral, obscene or brutalizing” texts.


The trial at the Bern district court was opened in the same year. The plaintiffs, who were represented, among others, by the lawyer Georges Brunschvig, did not primarily pursue the goal of convicting the accused frontists as quickly as possible; rather, they sought legal certification that the “protocols” were falsified. So the SIG went all out: it wanted to suppress anti-Semitism by depriving it of a “main weapon” and basis of legitimation – the popular “protocols”. It first appeared in the German-speaking world in 1919 and soon reached a circulation of over 100,000 copies; In 1929 they appeared in the ninth edition in the party publishing house of Hitler’s NSDAP and from 1934 were official teaching material at German schools. They were particularly widespread in the United States, where they were propagated by automobile manufacturer Henry Ford. By the early 1930s, they had been translated into sixteen languages.

The plaintiffs’ strategy seemed to be working: their prominent witnesses (including several Russian historians), but above all the bipartisan opinion of the Bernese writer Carl Albert Loosli, let the courageous judge, who was not impressed by the Nazi expert brought in from Germany by the accused, 1935 come to the conclusion that the “protocols” are plagiarized and violate the law. The frontists were fined. The SIG and with it a democratic public – press representatives from all over the world had followed the process – welcomed the verdict.

One of those welcoming the verdict at the time was The Jewish Press — not to be confused with today’s Jewish Press. This one was published in Omaha, Nebraska.

In his May 24, 1935 column, The Week in Review, Milton Brown described the verdict as “a blow not only to the Nazis in Switzerland but to the entire anti-Jewish propaganda conducted by Nazis all over the world”:


The verdict once and forever puts an end to the legend which was invented thirty years ago by the officials of the Czarist Secret Political Police, that the Jews have mapped a definite program to dominate the world. Although everyone knew the legend to be false, anti-Semites throughout the world did not hesitate from time to time to revive it.

…The verdict of the Berne court will go down in Jewish history as an important victory over bigotry and falsehood. The London Times, after an investigation, long since established the falsity of the notorious “Protocols”. Now this falsity has been officially established in a court. The verdict will remain the best argument of the Jews against all those who have been trying to utilize the “Protocols” for their anti-semitic purposes 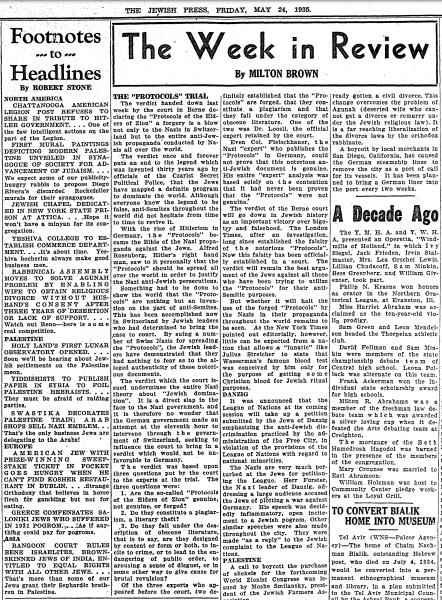 Of course, we know that is not how things worked out — “The Protocols” is still going strong.
The victory was premature.

In fact, it backfired.

Back to the NZZ Online:


But neither the frontist press in Switzerland, the National Socialist press in Germany nor the accused were impressed. They appealed and were acquitted in second instance in 1937: the question, according to the Bern Higher Regional Court, as to whether the “minutes” were genuine or not, was irrelevant for the assessment of the facts. They are a “political weapon”, not trash literature and therefore do not violate the law. They are unlikely to incentivize a crime. [emphasis added]

The immediate result of the acquittal was the opposite intent of bringing the case to the court to begin with:


the entire anti-Semitic and National Socialist press exploited the acquittal propagandistically, claiming that the authenticity of the “protocols” had now been proven…the attempt to legally refute the “authenticity” of the “protocols” paradoxically strengthened the aura that surrounds it today. In retrospect it seems almost tragic how some honest men tried to expose the “protocols” as “fakes” and welcomed the court ruling as a defense against anti-Semitism.

So here we are.

Reading about the measures being taken around the US to curtail the antisemitic BDS movement, we can only hope that those laws are more effective and — more permanent.

But when we expect the law to be able to protect against Jew-hatred, I am reminded of the Charles Dickens book, Oliver Twist:


If the law supposes that,” said Mr. Bumble, squeezing his hat emphatically in both hands, “the law is a ass — a idiot. If that’s the eye of the law, the law is a bachelor; and the worst I wish the law is, that his eye may be opened by experience — by experience.”